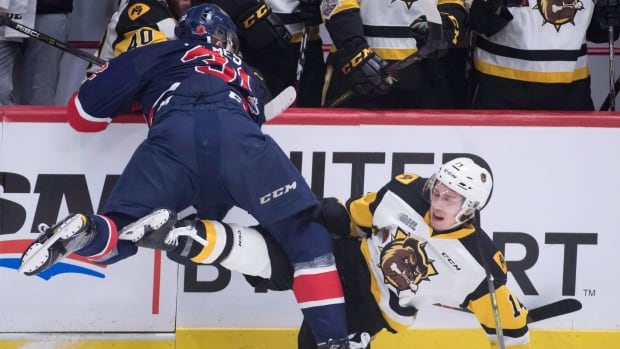 Ontario Premier Doug Ford is leaving the door open for bodychecking to remain in the Ontario Hockey League for the upcoming season.

Ford tweeted Saturday night that he is working on a return to play plan with the OHL that would involve physical contact. He acknowledged that the plan would need to be approved by health experts.

We are engaging with the <a href=”https://twitter.com/OHLHockey?ref_src=twsrc%5Etfw”>@OHLHockey</a> to create a safe return to play plan, which will need to be approved by health experts. To date no decisions have been made. I would like to see the OHL return as normal as possible with body checking.

This comes one day after Ontario’s minister of sport, Lisa MacLeod, said bodychecking would not be allowed during the COVID-19 pandemic in a speech delivered to the Empire Club of Canada.

The minister says the decision to ban bodychecking came after outbreaks in the Quebec Major Junior Hockey League, which led to games being postponed and rescheduled.

WATCH | Minister of Sport Lisa MacLeod on bodychecking in OHL:

Ontario’s Minister of Heritage, Sport, Tourism and Culture Industries discusses the OHL’s return to play proposal during the pandemic. 1:04

Ford says he would like the OHL to return with rules as close to normal as possible.

The QMJHL is the lone league of the three major junior leagues in action. However, eight of the 18 teams aren’t allowed on the ice currently because of Quebec government restrictions.