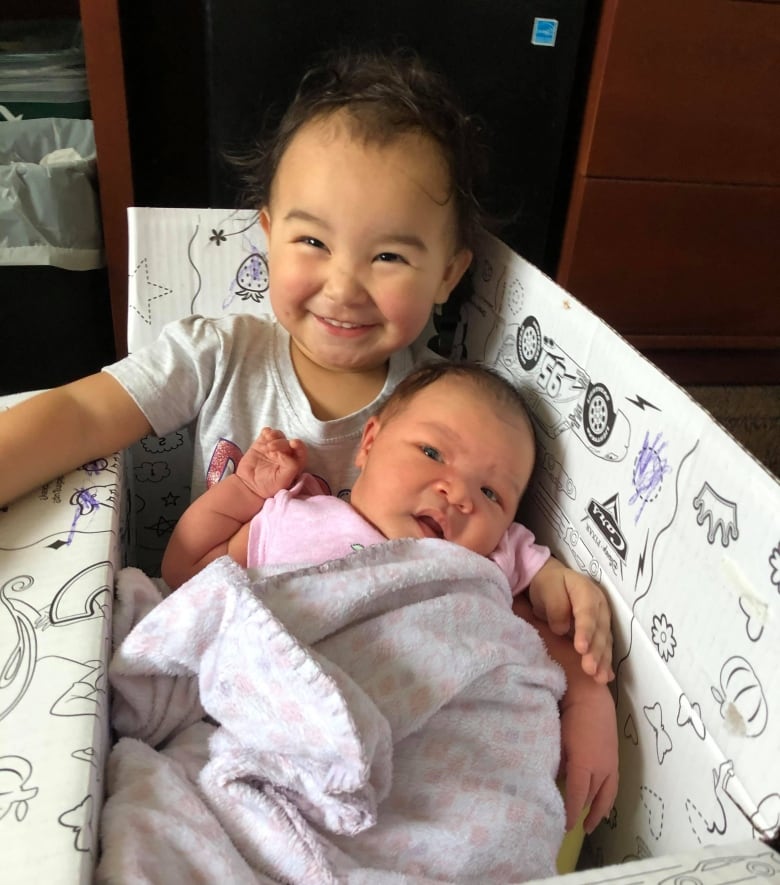 Angela Hogaluk imagined getting to know her new baby Harlow tucked away in their home in Cambridge Bay, Nunavut.

Her 10 pound bundle arrived on March 29 at Stanton Territorial Hospital in Yellowknife. Most pregnant women in smaller communities in the N.W.T. and Nunavut travel to larger centres to deliver their babies.

But instead that bonding happened in a Yellowknife hotel room while in quarantine for 14 days with her partner, Zachary Cziranka-Crooks and their two-year-old daughter, Rosa.

“It was just scary knowing that the virus was out there,” said Hogaluk who had already been in Yellowknife for several weeks before the birth.

The couple’s mothers travelled from Cambridge Bay to Yellowknife to help support them.

But a travel order from Nunavut’s chief public health officer — a week before the birth — extended the visit. The family, like all Nunavummiut returning to Nunavut, had to self-isolate for 14 days prior to leaving Yellowknife.

“I didn’t want to be there any longer than I had to be,” said Hogaluk, who notes the family supports measures to help keep COVID-19 out of Nunavut.

So, they decided to make the best of it.

“Staying in the room … stuck 24/7 and just being with our children. Like the four of us all together, it was really nice,” she said.

For 14 days a standard room on the fourth floor of the Explorer Hotel became their world.

Meals, diapers, and other supplies were delivered to their door.

Cziranka-Crooks and Hogaluk’s mothers became quarantine roommates in a room across the hall.

“It’s a small space for sure … you’re all kind of jammed in there,” said Cziranka-Crooks, the father.

“[But]it gives you time to really focus on what’s important,” he said.

While self-isolating a big focus was keeping two-year old Rosa busy while juggling the needs of a newborn baby.

“The two kids in one hotel room which is pretty crazy because you’re trying to put one baby to sleep and the other one’s screaming,” recalled Paula Cziranka, Zachary’s mother.

She said family friends dropped off books and toys for Rosa.

The grandmothers pleaded with health officials to let the toddler move between the two rooms to keep Rosa happy and give her parents a break.

[We] called each other our cellmates. And you know, tried to work together.– Paula Cziranka

“We laughed and joked a lot because that’s the only way to get through it,” said Paula Cziranka who had never spent so much time with Hogaluk’s mother.

“[We] called each other our cellmates. And you know, tried to work together,” she said.

Cziranka would often take Rosa to a designated area of the hotel’s parking lot for fresh air, just 15 minutes breaks.

Cziranka says it was obvious others in isolation were struggling. “You would hear women in their rooms alone crying because they were having a hard time,” said Cziranka. She considers her family lucky.

“To have your family with you there, I think it’s just important to cherish that time you do get to spend together … and just try to stay civil with each other,” she said.

Hogaluk says being in a suite — where they could cook and have more space for Rosa to run — would have helped.

It was “about a week” before they started getting regular calls from mental health workers, said Hogaluk.
“We didn’t really have much support but each other. But it was all we needed,” she said.

With travel restrictions still in place for Nunavut and the N.W.T., Hogaluk has advice for others who find themselves in quarantine.

“It doesn’t last forever. It may feel like it does … but it doesn’t. You just stick through it and know that it’ll be over soon,” she said.