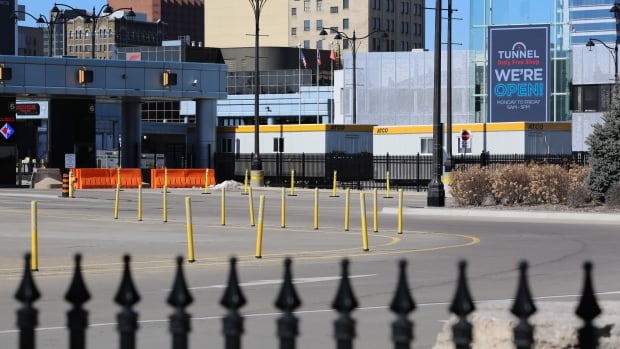 Starting Thursday, non-essential travellers who are already required to present proof of a negative COVID-19 test on the Windsor side of the land border must participate in on-site testing at the Ambassador Bridge or Windsor-Detroit Tunnel.

Trailers in the duty-free parking lots of both the Ambassador Bridge and Windsor-Detroit Tunnel, set up by the Public Health Agency of Canada and the Canadian Red Cross, will be used for tests of non-essential, Canadian travellers coming back into Canada — as well as those who have landed from out of the country.

Testing will begin Thursday at 7 a.m. at both the Windsor-Detroit Tunnel and Ambassador Bridge.

“This won’t affect [essential workers]. They’ll pull up to the customs lanes. They’ll say they’re an essential worker and they’ll do what they’ve done for the past year,” said Chris Tremblay, general manager for Windsor Detroit Borderlink, the company which operates the tunnel.

Melanie Soler, vice president of emergency management response operations for the Canadian Red Cross, said individuals who partake in on-site testing at the land border will be given two testing kits.

The first kit will be self-administered by the traveller inside the testing trailer.

“Once the traveler deposits that sample in a safe and sanitary spot, our personnel will put that in a refrigeration package to make sure it gets to the lab for testing.”

It’s not mandatory for individuals to be supervised by Red Cross staff when they self-administer their “day one” test, but the option is there in case they have any questions about it or need assistance, she added.

In fact, a non-essential traveller can self-administer the “day one” swab in their personal quarantine location, if desired, according to PHAC.

After the first test is done, the traveller will be given a second testing kit which they will self-administer on “day 10” of quarantine.

“The Public Health Agency of Canada is leading the collection of samples from travellers at land borders in coordination with federal partners including Public Safety and Emergency Preparedness and the Canada Border Services Agency,” said PHAC in a statement.

In all instances of on-site testing, travellers will be pulled away from the flow of essential traffic to ensure border flow keeps moving.

‘A lot can happen within 72 hours’

Since Feb. 15, non-essential travellers entering Canada through the land border have been required to provide proof of a negative COVID-19 test conducted 72 hours before arrival.

According to the Public Health of Agency of Canada, this on-site testing effort will help travellers “meet day one arrival requirements.”

But that doesn’t mean on-site testing will replace the need for a pre-arrival test. Non-essential travellers will still have to show up to the border with proof of a negative result even if they participate in on-site testing.

In fact, travellers without that pre-arrival test result may be directed to a designated quarantine facility by PHAC officials, according to the CBSA.

“From our level, is it redundant? Sounds like it’s redundant,” said Ambassador Bridge general manager Randy Spader. “I’m going to give you a negative test — and you’re going to test me?”

He adds, however, that “a lot can happen within 72 hours,” and the federal government is seemingly doing whatever it can to prevent the cross-border spread of COVID-19.

“Somebody who takes a test on Thursday, they’re at the border on Sunday. What were they doing for those three days?” he said.

“I think it’s just a precaution to ensure the testing ramps us and Canada has the most information available to them for people wanting to get home.”

An invalid or inconclusive “day 10” test result will result in another test being mailed out to the traveller.

The federal governments adds that failure to complete either of the self-administered swabs “could lead to fines of up to $750,000 or imprisonment.”