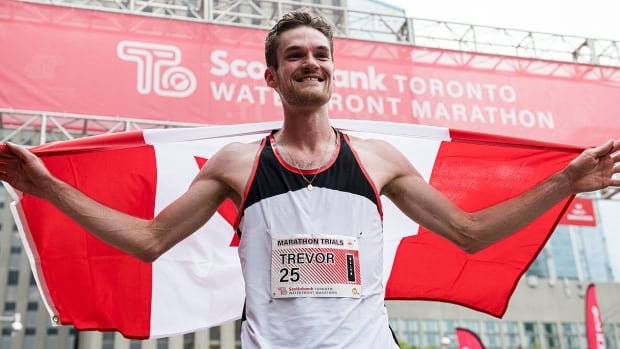 Trevor Hofbauer will gear up for his 2021 Olympic marathon debut by representing Canada at the World Half Marathon Championships next month in Gdynia, Poland.

In the midst of a coronavirus pandemic, the Calgary resident ran a personal-best time of one hour three minutes two seconds in a time trial at Edmonton to meet the 1:05:46 world standard a week before the qualifying window closed on Sept. 20.

“This year has tested every fibre of who I am, which I’ve had to be adaptable and accepting of every situation that has arisen,” Hofbauer, 28, said in a statement released by Athletics Canada.

“To put my feet on the start line and to give it my absolute best will make up for some of the downs this year.”

“Our team is strong,” Hofbauer said, “and I’m looking forward to sharing this milestone with the rest of the team. We are in a good position to improve our world ranking.”

At the 2018 half marathon worlds, the Canadian women’s and men’s teams placed 10th and 19th, respectively, in Valencia, Spain.

Hofbauer was one of three Canadian athletes to earn early nomination for the Tokyo Olympics, which was postponed in March and rescheduled for next July. He earned an automatic berth for being the first Canadian male to complete the Toronto Waterfront Marathon last October.

Hofbauer has competed at four other distance races in this abbreviated season, including the Mesa Half Marathon in Arizona, where he placed 10th in 1:07:42.

Born in Burnaby, B.C., Hofbauer was the 2018 Canadian half marathon champion after finishing in 1:08:26 in Calgary, seven months after winning his marathon debut at Toronto in 2:18:05.

World experience will be ‘very valuable’ to Kent

Kent, also 28, narrowly missed setting a Comox Valley course record in Courtenay, B.C., on Sept. 13 when he ran 1:04:20 alongside five of his BC Endurance Project teammates in a time trial for world half qualifying.

“He has been running well all year and a world championship experience will be very valuable to him,” BCEP head coach Richard Lee told CBC Sports recently.

What is a pacemaker? Are they important? Oh, they’re important alright. CBC Sports Anson Henry breaks it down. 2:44

On July 1, Kent won the men’s race of the first-ever virtual Canadian 10K Championships in a 28:52 PB after placing second last year in 29:58.3, three seconds behind Dylan Wykes.

The 24-year-old Preisner had planned to run his marathon debut in London this past April 26 before it was cancelled due to the pandemic and rescheduled for Oct. 4. Instead, he ran the 42.2-kilometre distance on his own in Rockport, Ont., and reported a time of 2:15:24.

Toth grew up in Lakefield, Ont., near Peterborough, and now lives in Plaistow, N.H. The 28-year-old has a 1:04:28 PB from Houston in 2016, a year in which Toth won his first national title at the Canadian championships.

Last summer, he was second at the Canadian half marathon championships in 1:05:28.

“Ideally, I would like to be sub 63 [minutes] for the half,” he told the Eagle-Tribune newspaper in North Andover, Mass., earlier this year. “As long as I’m confident in my fitness level, I like my chances. Getting ready for the [half marathon] worlds [originally slated for March 29], I felt like I was having the best training of my career.”

Toth ran in college at Cameron University in Oklahoma, where he was a first team All-American and holds several school records.

Cliff, the former Canadian record-holder for the half marathon and marathon, posted a winning time of 1:15:24 earlier this month to break Stephanie Andrews’ Comox Valley course mark of 1:16.

Like Hofbauer, Preisner and Toth, she was named to the Canadian squad for half marathon worlds.

“I’m so excited to be named to this team,” said Cliff. “After a spring and summer of race cancellations, I wasn’t sure when I would have this opportunity again.

“I think worlds will be a chance to get an understanding of what racing in this ‘new normal’ will look like. Competing on the world stage has never been something I’ve taken for granted, but I will appreciate it all the more this time round.”

Athletics Canada head coach Glenroy Gilbert said all athletes have had to adapt in a season with few competitions.

“Our runners have put in a lot of miles to get to this race,” he added, “and it will be a good test of their physical and mental preparation. I’m looking forward to seeing how they manage the race and expect some good results.”