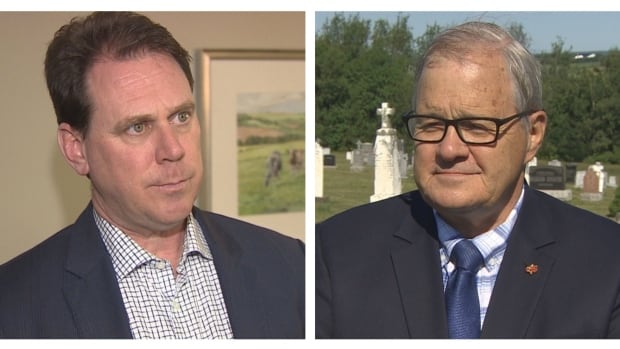 Some nurses who left their jobs at Health PEI to take positions with Veterans Affairs Canada asked for, but were denied, a secondment from their provincial jobs, according to the federal Minister of Veterans Affairs Lawrence MacAulay.

That’s from the latest in a series of letters between MacAulay and P.E.I. Health Minister James Aylward. Aylward wrote to MacAulay in October, expressing concern about a hiring campaign by VAC by which the federal department had lured away at that time, according to Aylward’s numbers, 25 registered nurses, two social workers and one psychologist from Health PEI.

Health PEI said this week that the number of nurses who have left for VAC has now reached 32.

As part of its effort to clear up a backlog of tens of thousands of disability claims, a spokesperson for VAC told CBC the department has hired 125 nurses across Canada, including 55 on P.E.I. Overall the federal department plans to hire 300 temporary staff and aims to clear up the backlog by March 2022. However the Parliamentary Budget Office says the job will require more staffing and an extra year to complete.

“Given the size of our province and corresponding size of the nursing workforce within our health-care system, this recruitment campaign has had a significant negative impact on our health human resources,” Aylward wrote to MacAulay in the first of two letters the health minister tabled in the P.E.I. Legislature.

Aylward went on to say some long-term care facilities also lost positions, and were operating with “a skeleton staff.”

Aylward told MacAulay it was “counterproductive” for a federal department to be taking nurses from provincial health care while Ottawa was at the same time sending additional resources to the provinces to help them deal with COVID-19.

I understand that many nurses were not granted leave when they requested it from the province’s health authority, and subsequently made their own decision to join Veterans Affairs Canada.— Lawrence MacAulay

“The number of nurses that have migrated from our system to your department has left a potential significant nursing gap should we experience a second wave resulting in a critical situation,” Aylward wrote in a followup letter dated Nov. 17.

In that letter, Aylward asked about the possibility of Health PEI receiving some of the nurses back from VAC on secondment.

But in response, MacAulay said some of the nurses hired by VAC had asked for a secondment working the other way around: they had asked Health PEI to be allowed to temporarily leave their provincial positions to help VAC clear up the backlog, but that request was denied.

“My department offered this option for consideration at the time of the recruitment campaign, recognizing the pressures that all health systems were facing,” MacAulay wrote to Aylward.

“I understand that many nurses were not granted leave when they requested it from the province’s health authority, and subsequently made their own decision to join Veterans Affairs Canada.”

MacAulay said the positions are only temporary, and that he’d instructed his department “to be as helpful as possible on this matter.” He said VAC is “willing to assist the province with its pandemic response should the current situation change.”

Mona O’Shea, the head of the P.E.I. Nurses’ Union, said she found it “interesting” Aylward reached out to MacAulay over the nursing shortage. She said the province was already facing a significant number of nursing vacancies even before VAC started recruiting.

She said Aylward might have done better to take his concerns to the union. She said nurses are looking for “better work-life balance,” and are being denied requests for “temporary leave of absence for education, for movement within the system, vacation, being called back to work when on vacation.”

O’Shea said nurses are feeling “undervalued, not appreciated and always being asked to do more with less.”