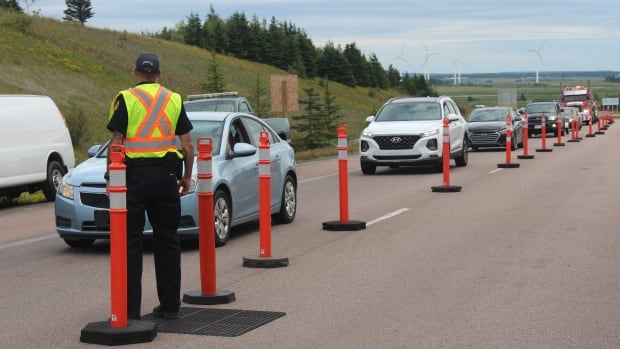 As COVID-19 case numbers spike in other parts of Canada and around the world, they remain low in Nova Scotia and the province’s chief medical officer of health says restrictions on entering the Atlantic bubble are largely to thank.

It means Dr. Robert Strang does not want to see the bubble burst any time soon.

“Border restrictions have to be part of our ongoing COVID approach,” Strang said at a media briefing Tuesday.

This comes after some speculation, starting in the summer, that Nova Scotia Premier Stephen McNeil was preparing to lift the 14-day isolation order for travellers ariving from outside the region. McNeil has said that opening to the rest of Canada “is something we’re going to have to do,” despite the risks.

“We can’t stay closed forever,” he told reporters in July, just a few weeks after the bubble came into effect. “Our families need to reunite and our economy needs to ignite.”

Premier backs away from bursting bubble

But this week, McNeil took the same position as Strang.

“To our business community, I know this hasn’t been easy, but you are finding ways to innovate and operate dealing with COVID-19,” he said.

“Some might feel that we’ve overreacted with our restrictions. I want you to look around the country and other provinces — their numbers are spiking again and in some cases, they’re even worse than before. This is a worry. If we don’t believe there is a second wave coming, look outside of the Atlantic bubble.”

Last week, Ontario tightened some restrictions after seeing a surge of new cases. This week, health officials in Quebec declared a second wave of COVID-19 is underway, and federal officials projected cases to accelerate nationally.

Both Strang and McNeil said they believe the travel restrictions — along with masking, other public health guidelines, and testing and contact tracing — have made Atlantic Canada one of the safest places in the world, as far as the coronavirus pandemic goes.

Strang said the recent influx of students from across the country and internationally proved the effectiveness of Nova Scotia’s approach.

Nearly 4,000 post-secondary students have entered the Atlantic bubble since August and all were required to self-isolate for 14 days, check in daily to report symptoms and take up to three COVID-19 tests.

With 89 per cent of the students now out of isolation, Strang said there was 94 per cent compliance with the daily check-ins, and as of Tuesday the incoming students had undergone a total of 8,826 COVID-19 tests.

From those, health officials reported three indeterminate test results which turned out not to be true cases, and one true positive case of COVID-19.

“I certainly consider that our approach to universities has been a significant success,” Strang said.

Strang said the Atlantic bubble is also an important layer of protection for schools, which reopened earlier this month for the first time in half a year, and long-term care facilities, which were hit hard by the first wave of the pandemic.