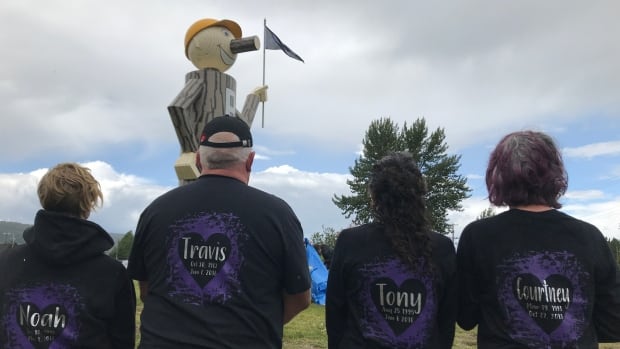 A grieving Prince George mother is begging B.C.’s political parties to look past the stigma around drug users and make safe supply an election promise.

More people died of an illicit drug overdose in the province in the first eight months of 2020 than all of 2019, according to the BC Coroners Service — and this year’s death rate is highest in the Northern Health Authority region, with 40 deaths per 10,000 people compared to the provincial average of 31.

While deaths were down across the province in August compared to July, that was not the case in the northern region, where the numbers have stayed high all summer.

Lindsay lost her 21-year-old son, Noah, to an illicit-drug overdose in 2018. He was housed, employed and as far as his family knew, doing well at work, when a fatal dose of fentantyl got mixed into the drugs he was using.

According to B.C.’s Chief Coroner Lisa LaPointe, the spike in deaths in 2020 can be linked to the pandemic forcing more people to use in isolation, without anyone to call for help.

After her son died, Lindsay said she no longer can read the comments sections on media stories about overdose deaths because she finds it re-traumatizing to see how many people are “comfortable discounting the lives of people who use drugs.”

She said the stigma around drug use also factors into political policies drugs and this needs to stop. Lindsay is calling on those vying for election in October to make illicit-drug overdose prevention a campaign promise.

She is adding her voice to the many experts and advocates calling for a safe supply of drugs to be made available to anyone who needs them, as well as the decriminalization of possession.

In March, the province expanded access to a safe supply of drugs — including the painkiller hydromorphone as a substitute for opioids — to users at risk of developing a COVID-19 infection, overdosing or going through withdrawal.

But many substance users and advocates, including Moms Stop the Harm (MSTH), which Lindsay is a member of, and the Vancouver Network of Drug Users (VANDU), say the program does not go nearly far enough, and the recent rise in deaths proves it.

More than 1,300 people have accessed safe, prescription alternatives to illicit drugs since the province announced new guidelines for prescribing them when the COVID-19 pandemic began.

For more than a year, B.C.’s Provincial Health Officer Bonnie Henry has also been calling for the decriminalization of the possession of illicit drugs.

Prime Minister Justin Trudeau said he would not back decriminalization of drugs as a public-health response to the country’s escalating opioid crisis.

He made the comments during a Sept. 2 interview on CBC’s The Early Edition, where he insisted that the approach, while raised as an option by advocates and medical officials across the country, is not a “silver bullet” solution.

The overdose crisis was barely mentioned during Wednesday’s speech from the throne.

Lindsay is not impressed. “This is an emergency situation and I think the government speaks loudly and clearly when it does nothing,” she said.

To hear the complete interview with Nicole Lindsay on Daybreak North, tap here.