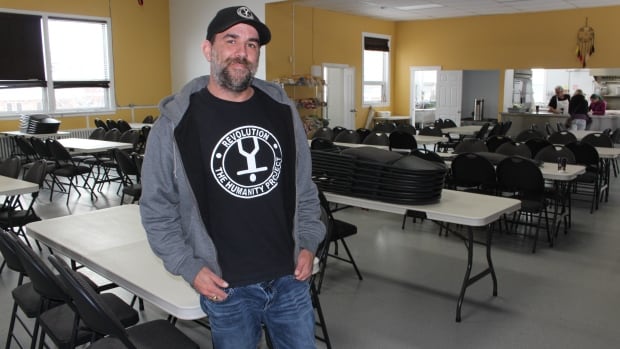 The head of a Moncton non-profit says he has nothing to apologize for after it came to light he liked the Facebook page of a known hate group.

Charlie Burrell, the founder of the Humanity Project, a group that ran a temporary shelter last winter and provides free meals to vulnerable people, said he liked a page belonging to the Northern Guard about three years ago after a friend sent him a link to the page.

The Canadian Anti-Hate Network, which monitors and researches hate groups, has called the Northern Guard an anti-Muslim militant group with neo-Nazi ties.

Burrell’s connection to the group came to light after the network noticed a Northern Guard page endorsed a project by the Humanity Project. The anti-hate group posted an article about the connection on its website.

The project, previously reported on by the CBC, would see a community of tiny homes built on a farm near Salisbury for people with addictions and mental health problems

The network says Burrell is an “active participant” in a private Northern Guard Facebook group, but Burrell said his relationship with the group is superficial at best.

He said he liked the page years ago without thinking much about it when a friend, Nick Gallant, a member of the Northern Guard, sent him an invitation on Facebook.

“Hitting like on a Facebook buttom, or clicking a button on the internet, is a lot different than living a lifestyle,” said Burrell.

“I noticed the other day when I looked I’m also on a flat earth page, but I’m pretty sure the earth is round.”

Evan Balgord, the executive director of the network and author of an article about Burrell’s connection to the Northern Guard, said the group is an offshoot of the Sons of Odin, a well-known neo-Nazi group that originated in Finland.

“The Northern Guard hasn’t been all that much different, though they have tried to be a rebrand of it,” said Balgord.

“At its core, its DNA is xenophobic … anti-Muslim and that’s what you’ll see if you’re kind of inside their private Facebook pages.”

Not convinced group is racist

Burrell said he didn’t even remember he liked the page until the controversy arose, and he’s “still not convinced [the Northern Guard] are even racist.”

“When I went on their page and I started looking through, I honestly didn’t see anything on there that was racist. I seen a bunch of funny memes and stuff.”

Burrell said the Northern Guard has no role in the Humanity Project but maintained he can’t be held responsible for who raises money for its work or who shares the project’s posts on social media.

He said he’s concerned that people will read the network’s article and not reach out for the help the Humanity Project provides.

“I serve people that come here every day that are Muslims,” said Burrell.

“Now, let’s say one of those people seen that article and they don’t feel like they can come here anymore and bring their children here to eat because of one hateful article that was written on the internet. Those children now go hungry. That’s not on me, that’s on this anti-hate group, and I’ll use the word anti-hate very loosely because if you look at their page, there are some real haters on there.”

Balgord said he understands the project does good work and did not mean to personally attack Burrell.

He just wanted assurance from Burrell that members of the Northern Guard will not be volunteers at the Salisbury-area project or raise money for it.

Balgord said hate groups often get involved in service projects to whitewash their image and to prey on vulnerable people to get them to join.

“If there’s a group like the KKK that decides to come to your neighborhood and they say, ‘we’re just here to, like, help run the soup kitchen,’ you’re still not going to want them anywhere around that,” said Balgord.

“The Northern Guard at its core is a hate group.”

Burrell said he will look into the group and if he finds it is racist will refuse help and donations.