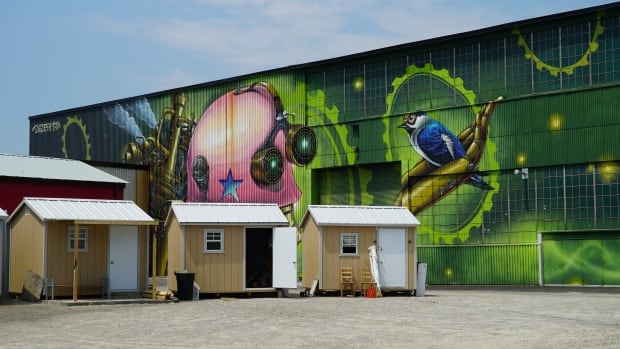 Increased capacity pressures in emergency shelters signal a growing need for the creation of modular housing in Waterloo region.

But Ryan Pettipiere, director of housing services for the Region of Waterloo, says there is no plan to pilot tiny homes for emergency shelter at this point.

“Right now we’ve been just under an exercise of expanding, trying to get capacity right with what we have and what we can find,” Pettipiere said.

He says next steps of the emergency shelter system is envisioning the next six months and how to get people into housing after the winter.

“Part of that plan and that longer term vision will include transitioning from emergency shelters to some of these modular developments. Tiny homes on a piece of property is not off the table as part of that exercise, but there are no concrete plans to put that forward or pilot that over the next six months,” Pettipiere added.

In August, regional staff were directed to look at ways to open two dormitory-style emergency shelter spaces for this fall and winter.

The plan was to create space for a minimum of 160 emergency shelter spaces, which could cost as much as $7 million, half of which would be to cover the costs of staffing and half would be for renting the spaces for a year.

Staff were also directed to look at more options for alternative housing that could be implemented in spring 2021.

In the business case, staff outlined plans to access $3.5 million of the funding under the capital component new facilities stream to create modular housing.

According to a report presented to council, this funding must be delivered efficiently, with deadlines to commit the funding by Jan. 31, 2021, and complete the project by Dec. 31, 2021. As such, the use of funds to develop modular housing was favoured, as projects developed using traditional construction methods are unlikely to meet the prescribed deadlines.

Councillor Jim Erb said it is time for the region to “build ourselves out of shelter spaces.”

“We need to find an exit strategy from shelter care so that we can offer permanent housing to some of the most vulnerable in our community and these modular homes, hopefully, is one way of doing that fast,” he said.

Erb pointed to pilot projects in Cambridge and also on Beechwood Drive in Waterloo as examples.

While acknowledging that “one size doesn’t fit all,” Erb said for the majority of people, safe housing is the foundational piece of determining good health.

“I think this is a major step forward in a way of exiting our shelter system and looking for something more permanent.” he said.

Meanwhile, Region of Waterloo Chair Karen Redman said transitioning people from the shelter system should include a plan to set them up for success.

“They need to have those ancillary supports that need to be there when they get out of the shelter system and they may need supportive housing, so we have to continue,” Redman said.

She added that operating funding needs to be in place to provide services people need to be successful and also for the region to invest in the housing over time.

“What we saw with Ontario Housing 30-40 years ago is that all of those buildings became very run down because people weren’t putting money back in to keep the facility up and at the end of the day we’d end up with places that nobody would want to live,” Redman said.

On Tuesday, Prime Minister Justin Trudeau announced the launch of the new Rapid Housing Initiative (RHI) that invests $1 billion to create up to 3,000 new permanent, affordable housing units across the country.

Region of Waterloo has been allocated $8.2 million under this initiative.

The RHI takes a human rights-based approach to housing, serving people experiencing or at risk of homelessness and other vulnerable people under the National Housing Strategy (NHS).