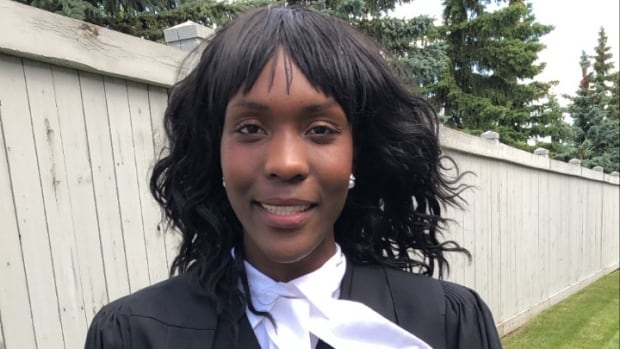 This week, Claire Brown was called to the Alberta bar by one of her role models.

On Monday, she was called to the bar by Court of Queen’s Bench Justice Gaylene Kendell, who’s one of Canada’s only Black female justices. Brown said she has looked up to Kendell since the first time she saw her, and views her as brilliant in her work.

Kendall was Brown’s first choice when she had to find a judge to preside over her ceremony. When it happened, Brown said the experience was inspiring.

“It felt so warm and affirming,” said Brown, who was interviewed on CBC’s Radio Active on Tuesday afternoon. “I see myself in her. From the first time I walked into family chambers and I saw this glorious Black woman sitting up there, I was like ‘who is that?'”

Brown moved to Edmonton with her family in 2007 from Kenya, where she attended high school and later MacEwan University. She didn’t always know she wanted to be a lawyer, and hadn’t even considered the possibility until a professor at MacEwan suggested it.

She was accepted into Thompson Rivers University in Kamloops in 2016, before later returning to Edmonton to article at Engel Law in January. She’ll now be staying on as an associate,

Coming from a law school with few Black students and seeing little representation in the province’s judiciary, Brown said she wants to see more meaningful diversity and inclusion in what has historically been a very white space in Alberta.

Brown noted that Justice Kendell has said in the past that the judiciary should reflect the community it serves, and said she agrees.

“I think we’re making progress when it comes to gender parity, but for sure when it comes to representation of people of colour in the Alberta judiciary, we still have a long way to go,” Brown said.

That is reflected in some federal data for all of Canada.

According to the Office of the Commissioner for Federal Judicial Affairs Canada, of the 86 judicial appointees from Oct. 28, 2018, to Oct. 28, 2019, more than half, 47, were women. But only two of those appointees identified as Indigenous, and only four identified as a visible minority.

Law schools also need to be doing a better job when it comes to meaningful diversity and inclusion, Brown said. TRU’s law school started in 2011, and Brown said there was only one Black student at the school when she arrived. There were four in her graduating class, and she said the year afterward, the school went back down to just one Black student.

As president of the Black Law Students Association at TRU, Brown said she tried to work with faculty and admissions to address the problem, but by the time she graduated they hadn’t made any progress. She said some schools will argue that it’s simply the case that not enough non-white applicants are applying, but Brown said more support needs to be given to Black students to know law school is an option in the first place.

“It’s not a pathway that is obvious to people of colour,” she said. “From my own experience, when I finally decided I’m going to apply to law school, I didn’t even know where to start. I had no mentor.”

Brown said the way applications are reviewed can miss good candidates by weighing students’ GPA too heavily and not taking a more holistic approach, looking at applicants’ experience and what they’ve been through in life.

Now, Brown said working with Tom Engel at Engel Law is a perfect pairing. She praised Engel for being a “voice of the voiceless” and championing social issues. She said she wanted to become a lawyer after she learned about the “appalling” over-representation of Indigenous and Black people in the criminal justice system.

“I just felt this conviction that I have to do something about this, I have to be an agent of change, wherever I can. And I hope to do just that.”