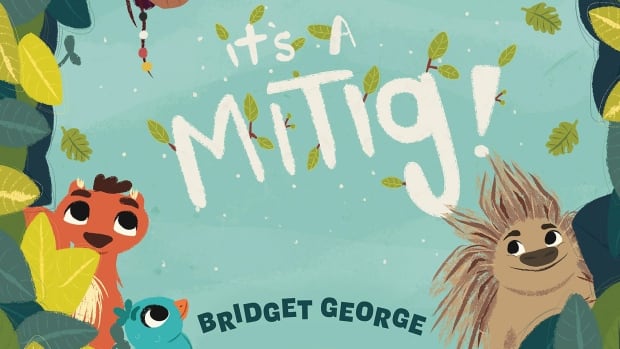 When Bridget George was pregnant with her first child, she wanted to make sure he grew up with the cultural representation that she didn’t have.

But she struggled to find children’s books that featured Anishinaabe culture and language, so she decided to write her own.

It’s a Mitig! Is written in a rhyming combination of Anishinaabemowin and English.

“I wrote it so the English words would rhyme with the Ojibway words so that people like myself and my family who aren’t familiar with the language or who are reclaiming and relearning their language are going to be able to pronounce the words without being intimidated by it,” said George.

An illustrator and graphic designer by trade, this is the first book she has written and illustrated. She said the book is laid out so that the spreads feature an animal or a part of nature, describe what it is in English and then give the Anishinaabemowin word for it.

Now based in London, Ont., George grew up in Kettle and Stony Point First Nation in southwestern Ontario. She took Ojibway classes in school but said she never really connected with her cultural identity until later in life.

“I think a big piece of that is I didn’t have representation in the media of people who looked like me or spoke like me so I didn’t really appreciate what was being given to me as a child with those language classes,” she said.

She said she wanted to make sure her son had the opportunity to grow up with the cultural representation that she didn’t have, “so that he could see people that looked like him, that spoke his language, so he could grow up proud of who he was.”

George said that on her own journey to learn Anishinaabemowin and more about her culture, she’s realized how much identity is connected to the language.

This served as inspiration for the contents of the book, rooting it in the natural world.

“For me a big part of feeling that pride in who I was came from learning to respect and know where I fit in with nature and the rest of the world, too,” said George.

“I thought that would be a good way to start to teach my son that, too.”

George hasn’t started writing any new books yet as her son is only 17 months old, but she said she’d love to see the book become a series.