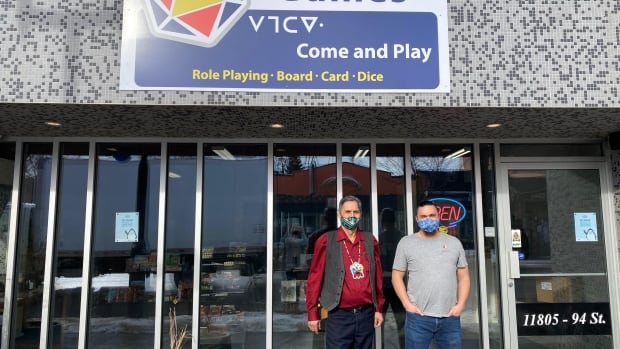 A new Indigenous-owned board game shop in Edmonton is aiming to create an inclusive community where everyone can join in the fun.

Pe Metawe Games opened earlier this month in the Alberta Avenue neighbourhood. The Cree name translates to “come and play” and features Cree syllabics used in its marketing materials.

Part of that work is more inclusive representation. Many board games have a colonial theme and feature poor representations of Indigenous communities.

“It’s very much about a colonial approach to interacting with Indigenous people in North America,” Plamondon said of certain games.

Edmonton AM8:14Breaking down barriers and encouraging Indigenous board gaming

We’ll hear about a new Indigenous-owned space in Edmonton aiming to break down barriers and encourage everyone to get on board gaming. 8:14

Pe Metawe hopes to combat that by featuring Indigenous creators in the industry.

Nunami, created by Inuit designer Thomassie Mangiok in northern Quebec, is displayed prominently in the shop with some copies being given away to community guests. A science fiction roleplaying game in development that imagines a North America where colonization never happened, called Coyote and Crow, is another game Pe Metawe is keen on supporting.

It also aims to increase representation of other marginalized communities. When ordering copies of the relationship game Fog of Love, Plamondon said they were sure to get the covers that feature same-sex couples.

“It’s just an approach that’s really near and dear to our heart as an Indigenous organization, as an organization that has always been very community-minded.”

The location in Alberta Avenue also opens up the hobby to those who might have issues with mobility or accessibility.

“Just in the short time we’ve been open, I’ve had probably at least a dozen people that live in or around the avenue say how excited they are to have a gaming store within walking distance,” Plamondon said.

“There is already a sense of community around the space that we’re creating.”

The space has two private gaming tables for rent as well as an open community gaming space with demo games for a per person fee — or at least will in the future.

“We’ve been very clear with our team, with our customers [and] with our clients that we’re very risk averse when it comes to dealing with the pandemic,” Plamondon said.

But COVID-19 has allowed his other business, Pe Metawe Consulting, to expand its geographic reach through virtual sessions. The group has worked with various Treaty 8 organizations, using tabletop games in workshops to engage and develop life skills for Indigenous youth.

The store came as a consequence of that business.

Plamondon started discussing the venture in late 2019 with his business partner, Jayde Gravel. Through their work, they discovered that a lot of game distributors will only work with a company if they have a brick-and-mortar store.

They successfully applied for a grant from the Alberta Indian Investment Corporation and signed a lease in November.

“We’ve just been kind of doing the renovations, building our presence in the gaming community,” Plamondon said, adding that they are seeking out different community partners to help build their vision.

Sales are not the focus of the gaming space, according to Plamondon.

“We just want people to come in and interact with the space and ask questions and learn more about the hobby. It’s really just about trying to reduce barriers to the hobby for everybody,” he said.

“All we really want to do is just create a community space where people feel welcome and feel included.”