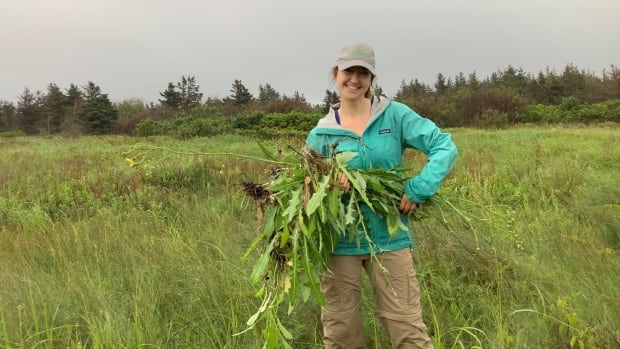 The Nature Conservancy of Canada (NCC) is trying to get control of large patches of perennial sow thistle, which is growing on areas of land it holds behind Blooming Point beach.

The Nature Conservancy acquired the land in 2018, and discovered the invasive plant while surveying what was on the property. Sow thistle has flowers and leaves that are similar to a dandelion but it can grow a lot larger, up to 1.5 metres tall.

“We’re starting to see it more on the edges of our wetlands and on our dunes. So it’s becoming more of a concern, especially so [because] we don’t fully know the impact on these natural environments.”

NCC was out on the property recently with Parks Canada — which also has land at Blooming Point — and pulled up 14 bags of the weeds.

The plant is widespread across P.E.I. and eradication would be very difficult. The goal of NCC is twofold. One, to manage the plant so it doesn’t get out of control on the property, and two, to study what impact the weed has on the local ecology.

“It crowds out a lot of native species and it is taking up a lot of space that could otherwise be occupied by native plants,” said Kienzle.

The weed is relatively easy to pull up, said Kienzle, but older plants can have roots that go down as far as two metres, and leaving behind even a small fragment of root can be enough for a plant to grow back.