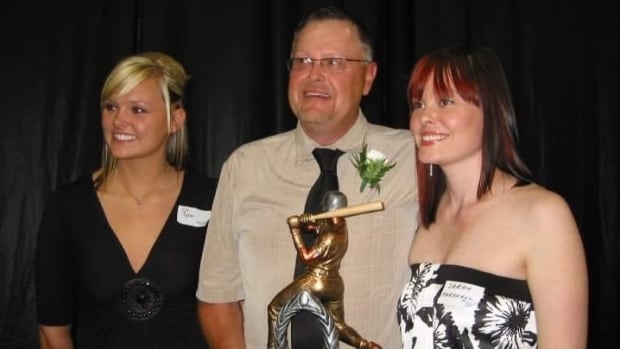 Tasha Jory, 37, struggles with what she calls “suspended grief” over her father’s death.

Dale Hunter, who lived on a southwestern Manitoba farm near Belmont, died suddenly at home from a heart attack on April 20.

Jory, who has lived in British Columbia for the past 12 years, got the news over the phone from her dad’s sister, a nurse in Brandon, Man.

“I keep having this running track in my head of memories, or just constantly thinking about him. Replaying that phone call back in my head when my aunt told me he was gone. So many sleepless nights in the beginning,” said Jory.

She spoke with her sister in Grand Prairie, Alta., trying to figure out how they would hold a funeral during the COVID-19 pandemic, during which large gatherings have been restricted.

They also knew they couldn’t travel back home to Belmont, even though that is what they desperately wanted.

We are social beings who crave social contact, human contact. These are being blocked during the pandemic and there will be fallout.– Paul Adams, Canadian Grief Alliance

Jory’s grandmother is self-isolating in her condo, and her grandfather, who is in a Brandon personal care home, can’t have visitors.

“A family member was unable to tell my grandfather his son died until my aunt, the nurse, was able to see him before a medical procedure,” said Jory.

“My grandparents couldn’t even be together to grieve. We couldn’t be with either of them…. We just felt helpless.”

They considered holding a very small service for five people, or even gathering on Zoom. In the end that didn’t feel right. Her grandparents don’t have computers.

“There is a reason why we have funerals. I find it hard to get any type of closure,” said Jory.

No ritual of funeral

She knows other families across the country are having a similar experience.

“This is new ground we really don’t know how to tread,” said Jory.

Dr. Harvey Chochinov says her story illustrates what he calls “distorted” dying and grief caused by the pandemic — and he’s part of a new organization that says Canada needs a national strategy to deal with that grief.

Chochinov is a distinguished professor of psychiatry at the University of Manitoba. He is also the co-founder of the Canadian Virtual Hospice — an online resource on issues related to death, dying and bereavement that connects with more than 2.5 million people every year.

“As a result of the physical distancing and public health restrictions upon visiting and holding funerals, the process of dying is being distorted. As a psychiatrist, what we are seeing and what we anticipate is that the process of grieving is also distorted,” said Chochinov.

He says not only has COVID-19 affected patients who have been infected with the illness and died, but the pandemic has also affected the process of dying for tens of thousands of people who are facing death from other causes.

Alliance born out of COVID

In response, the Winnipeg-based Canadian Virtual Hospice formed the Canadian Grief Alliance, gathering 36 leaders in grieving and bereavement from across the country. The group includes psychiatrists, psychologists, social workers and researchers.

In a proposal released earlier this month, the coalition asks the federal government to invest $100 million over the next three years for a national pandemic-related grief strategy — including specialized supports for front-line health-care workers and first responders suffering grief-related trauma.

Paul Adams is the spokesperson for the alliance. He says having a support network of family and friends around you is critical in moving through grief leading up to a funeral and in the days after.

But now, people finding out about the death of their loved one when they can’t be physically present, he notes. They may be alone in an empty home when they get the news.

“We are social beings who crave social contact, human contact. These are being blocked during the pandemic and there will be fallout,” said Adams.

Jory is experiencing that first-hand.

“I found it more difficult to grieve, and kind of be able to get the emotions out that I know need to come out. I am struggling to fully grieve without being able to see my sister,” she said.

Chochinov says there is a price to pay emotionally and psychologically for not being able to be at the bedside of a dying loved one.

That leaves mourners unable to follow what he calls “the path of least regret.” They don’t know if their loved one died in pain, for example, or if someone wearing a latex glove held their loved one’s hand when they took their last breath.

“Those are the things that we feel need to be done for the people we love. None of that is available,” because of COVID-19, said Chochinov.

There are other layers of grief too, says Adams, such as health-care workers leaving the bedside of a deceased person, having to isolate from their own families at home and being expected to “suck it up” on the job.

“There is a limit to how much those on the front lines can hold in terms of grief, and I think there is going to be a hangover,” he said.

In addition to a national grief strategy, the Canadian Grief Alliance is also calling for a public awareness campaign focusing on coping strategies such as the Canadian Virtual Hospice’s MyGrief — an online resource that aims to help people work through the grieving process — and KidsGrief, which offers resources for parents helping a child dealing with death.

The group is also calling for $10 million dollars for research. Chochinov says because we are in unprecedented times in terms of grief and mourning, research needs to be done to determine the best way to address it in the wake of COVID-19.

Both Adams and Chochinov say if grief support isn’t available, the consequences could be devastating.

“It may be grief that becomes complex, meaning that some people may become depressed.”

That might manifest as anxiety, post-traumatic stress disorder, substance abuse or even thoughts of suicide, Chochinov said.

“There is a kind of train that starts moving if grief isn’t dealt with. It can turn into a mental health issue and down the road affect someone’s physical health,” said Adams.

In a written statement, Health Canada has confirmed it has received the Canadian Grief Alliance’s proposal.

It says the government’s recently rolled out $25-million Wellness Together Canada Portal — which provides online access to a range of mental health and substance abuse supports — can be used to help people work through their grief of losing a loved one.

Adams, though, says the federal government’s latest funding for mental health does not include money for grief support services.

“Mental health services do not see grief as their mandate,” he said.

Tasha Jory says she suspects there are many others who need support in dealing with their grief.

“I am constantly replaying what has happened in my head. Missing my dad, who was so well known and loved in the community,” as well as a lifelong baseball fan and player, who was inducted into the Manitoba Baseball Hall of Fame in 2008.

Dale Hunter was cremated a week after his death. Jory and her family are waiting for the go-ahead to hold a memorial when everyone can meet at his farm to celebrate his life.

In the meantime, she has found a way to channel her grief.

“I sat down and wrote a letter to my sister. She did the same. We both wrote letters, which was super therapeutic. And then we shared our letters together.

“We kind of found our own way of working around the pandemic.”