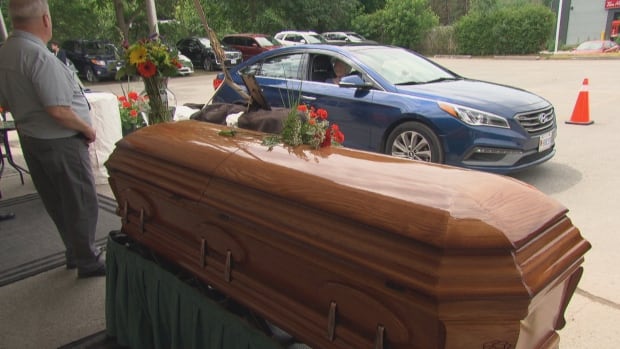 Even though funerals on P.E.I. may now have multiple cohorts of 50 people attend, most funerals homes are still asking families to keep the number of attendees to under 50.

P.E.I.’s Chief Public Health Office has allowed the increase since the end of June under Phase 4 rules, as long as an operational plan is in place.

But many of P.E.I.’s funeral homes are not laid out to properly handle multiple cohorts of 50, the P.E.I. Funeral Directors and Embalmers Association says.

“Most of the funerals are still staying at the 50 mark,” said John MacIsaac, the association’s secretary-treasurer, and a funeral director at Davison Funeral Home in Kensington.

The Davison home is keeping the cap of 50, as MacIsaac said it doesn’t have what’s needed. That would require separate exits, entrances and washrooms for each cohort, and enough room to meet physical distancing requirements.

“There has been instances where, certain larger churches, we were able to have multiple cohorts of 50 if the churches had that on their own, because of their sizes,” MacIsaac said.

Livestreaming has helped those with larger families or more attendees, who can gather at a separate location and watch an online funeral service together.

“It certainly doesn’t replace people coming together,” he said. “But they’re still able to see the funeral and be part of it.”

MacIsaac said he is mindful that one of the first superspreader events in Canada was a wake held in Newfoundland in March. A total of 111 people were eventually infected and one died.

Families had been deferring funerals at the beginning of the pandemic, hoping rules would ease to allow more convenient travel and larger numbers of mourners. But MacIsaac said people are now going ahead with what is allowed, with some planning larger services in the future when rules permit.

Visitations, or wakes, and viewings are still limited to 20 people, because of the higher amount of close contact likely at these events, he said. Funeral homes have been allowing 20 people to come in, then doing a thorough disinfection of the space, then allowing another group of 20, he explained.