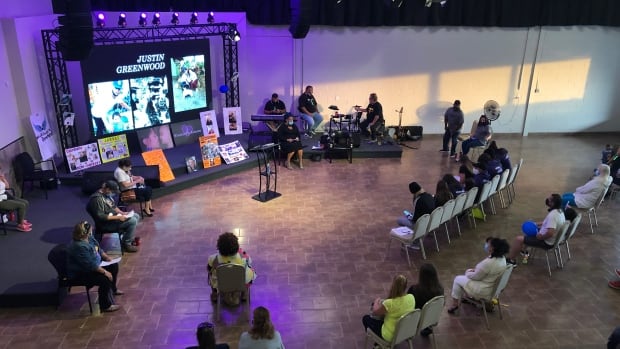 Family, friends and bystanders of violent attacks on Windsor youth gathered Wednesday evening in memory of their loved ones and to call for action from the justice system.

Despite climbing COVID-19 cases, more than 125 people gathered together for the Justice for our Murdered Youth’s third-annual march and candlelight vigil in The City Church on Dougall Avenue.

One of the event’s organizers, Lisa Valente,  said attendees followed COVID-19 guidelines by wearing masks, getting temperature checks and physical distancing. She added that it was “very important” for them to hold the event and support families that are grieving.

“We have a room full of families that feel that they aren’t getting justice, their children have been murdered and what’s happening is they’re going to the court and once they’re getting their sentencing they are getting between 11 months and seven years in prison and it’s just not right, a life is worth a life,” Valente told CBC News.

The event was also hosted by Carolyn Crankshaw and the Windsor group Parents Against Violent Crimes.

For Crankshaw, the issue hits close to home as her 18 year-old son Darrion Moffatt died in a Walkerville shooting in September 2018.

Following the shooting, Windsor police arrested and charged two men with first-degree murder, but Crankshaw is still awaiting a trial.

A preliminary hearing was scheduled for May but has been pushed due to COVID-19. Crankshaw said a trial likely won’t get underway until 2022 — four years after her son’s death.

“I would like to see justice served,” Crankshaw said.

“I think it’s unfair that my son is in the ground right now and [the accused] is sitting in his house surrounded by his family.”

Also in attendance was Rodney Stafford, whose eight-year-old daughter Tori Stafford was raped and murdered in 2009. Though Stafford lives in Woodstock, he said he came to the event to “help a lot of these victims realize that they have a voice.”

“Life should mean life, especially when it means taking the life of a vulnerable person,” he said, noting that it’s essential for victims and survivors to stand up so that Canada can become a safer place.

Stafford said he’ll do everything in his power to keep Michael Rafferty and Terri-Lynne McClintic, who were convicted in his daughter’s death, behind bars. He added that “it’s a lot better than the wooden box my daughter has to be in.”