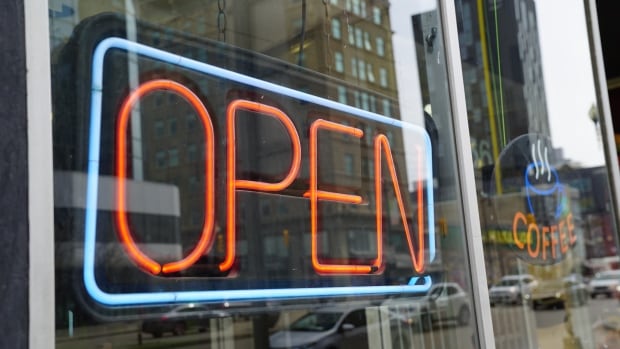 Opening a brand-new store in the midst of a pandemic may not be everyone’s idea of a solid business plan, but that’s exactly what Pam Wheaton and Mishelle Carson-Roy set out to do.

The two women first started talking in May about an idea for a new gift shop. They’re now putting the finishing touches on that shop and hope to open early next month.

“It was amazing to see it all come together so quickly — especially in a pandemic,” said Carson-Roy.

“I think it’s gutsy to do what we’re doing.”

So does the executive director of Uptown Saint John.

Nancy Tissington said it takes guts to open a new business when so many others were walking away — and she was a little surprised at how many were willing to do it.

She said the number of businesses that opened in the uptown area during the pandemic outweighed those that folded.

Tissington said there are at least a dozen brand new businesses that opened in the downtown core since the pandemic began. They include cafés and restaurants, shops and galleries.

Foot traffic alone might dissuade a prospective business owner from launching in the shadow of COVID-19. In the first months of the pandemic, pedestrian counters in the uptown area were shockingly low.

The lowest point during the pandemic was a three-week period starting the fourth week of March. On March 26, for instance, only about 300 people entered the City Market, where just a handful of food retailers remained open.

Some uptown areas, like Brunswick Square, seem particularly hard hit by the pandemic, but many of those closures, particularly on the deserted third floor, occurred long before the pandemic.

The people counters have been gradually increasing since restrictions were eased, but they still haven’t rebounded to pre-pandemic levels.

To go ahead with opening a business at that time was almost mind-boggling for Tissington.

“I think about, ‘Wow, really? Because foot traffic is down.’ … I still scratch my head and go, ‘Wow, they’re brave.'”

For most, the plans were already in the works before the pandemic began, said Tissington.

But for some, like Wheaton and Carson-Roy, the idea for Obscurity Shop, on Germain Street, was entirely conceived during the pandemic.

Wheaton said they had a “very brief conversation” about the idea, forged ahead, and never looked back.

“The timing doesn’t feel that weird to me,” said Carson-Roy.

For Eman Hussein, the timing almost couldn’t have been worse.

The owner of Uptown Eatery on King Street was planning to open her new restaurant at the end of March.

Then COVID-19 hit and everything but essential services were shut down.

Hussein had to wait until the government loosened restrictions before she was able to open her doors in mid-June.

Even then, many people were still reluctant to venture out and eat inside restaurants, but Hussein said she didn’t have a choice. She had to open.

“People are not comfy to go to restaurants and to dine in. So it is a very hard time and it was scary, but I have no other choices.”

Because she was new, she didn’t qualify for government assistance.

Hussein said she had all of the same costs and expenses as other restaurants, but without a business history, she had to foot the entire bill herself.

Hussein, who comes from Egypt, describes her restaurant as serving a mixture of North American and Mediterranean dishes.

One of the things she was forced to do to adapt to the public’s fear of COVID-19 is to use two different online ordering and delivery companies. She said those companies take between 20 to 25 per cent of the order, which means she makes no profit from deliveries.

“If we were not in a pandemic, I would not use these methods,” said Hussein.

Ready for a second wave

If there is a benefit to opening in a pandemic, Wheaton said it’s that Obscurity is ready for a second wave of COVID-19.

She said she and Carson-Roy are setting up a strong online presence, so that if things do get shut down again, they’ll be able to seamlessly switch to online sales.

Wheaton said that was one of the things that she scrambled to do after her other store, Heartbreak Boutique, had to close when the state of emergency was declared in mid-March.

Tissington said lots of companies that successfully “pivoted” after the initial shutdown, should be able to weather any potential second wave. Those who adapted well, were able to survive until restrictions were lifted, she said.

“From experience, I see those on the e-commerce side who are selling their goods and services through their websites or online tend to be successful,” said Tissington.

And that will put them in a good position if — or when — a second wave of COVID-19 hits.

Most will already have the infrastructure in place to operate in near-lock down conditions, said Tissington.