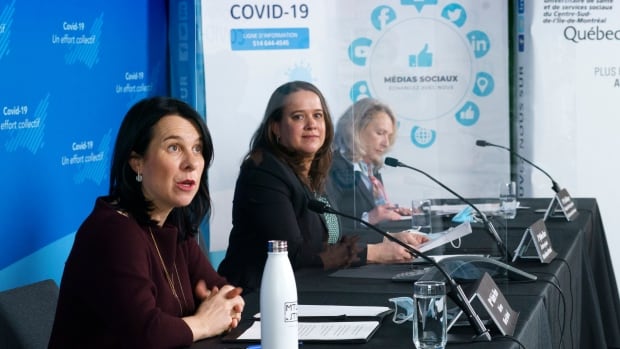 While Montreal public health officials are celebrating the start of the city’s campaign to vaccinate the public against COVID-19, they are urging the population to remain vigilant as variants of the disease are cropping up in schools, daycares and workplaces.

Dr. Mylène Drouin, head of Montreal public health, said the situation is improving in the city, but the rise of the variant first reported in the U.K. is a concern because of how contagious it is.

All tests are now scanned for possible variants, and currently about eight to 10 per cent of positive cases are of that more contagious strain, Drouin said during a news briefing Wednesday.

So far about 300 potential cases have been detected and 20 have been confirmed.

Health officials are responding more aggressively to potential variant cases than regular COVID-19 cases, Drouin said, in an effort to quickly contain outbreaks and slow the spread over the next months.

If nothing is done to stop transmission, it won’t be long before the variant first reported in the U.K. becomes the predominant strain of COVID-19 in the city, she said. The hope is that the virus can be held back long enough to get the most vulnerable residents vaccinated.

Drouin said the vaccine campaign is heading into full swing, with 75,000 doses on hand — more than enough to vaccinate residents aged 85 and up.

Roughly 18 per cent of Montrealers over the age of 80 have been vaccinated, and about 94,000 residents, including health-care workers and seniors, have received a shot.

The province’s initial focus on long-term care and retirement homes has already helped, Drouin said, with fewer outbreaks in those places that were once hard hit by the virus.

Older people have made up the majority of hospitalizations, intensive care stays and deaths related to COVID-19, she said — so as more and more seniors get vaccinated, the strain on the health network will subside further.

However, Drouin said, it takes up to three weeks for the vaccines to be effective and that is why people must remain cautious, follow public health measures and not let seniors babysit kids.

Variant of concern on the rise

Drouin said the variants have so far been most prevalent among those under the age of 50, with the majority of outbreaks occurring in schools and daycares. Kids then pass the disease onto their parents and other family members, Drouin said.

Since January, there have been 22 outbreaks related to variants in Montreal, she said. Eleven of those were in schools, six in daycares, three in workplaces and two in a social context.

She said it is important that people work with contract tracers and take calls from public health seriously so as to help contain the spread of COVID-19 variants.

Public health officials may elect to close classes or entire schools, daycares and workplaces, but complete closure of a school usually only happens “if we’re not sure the extent of the contacts that were in place,” Drouin said.

For those who qualify, reserving a vaccination time slot starts at 8 a.m. Thursday, and can be done by phone at 1-877-644-4545 or online at quebec.ca/covidvaccine. (The government is strongly encouraging people to reserve their spot through the online portal.)

Drouin encouraged people to reach out to their neighbours and family members, asking if they need help making a reservation or getting to a vaccination site.

Delivering vaccines to homes isn’t possible, she said, because they must be kept at a certain temperature.

“If you have a neighbour, even if you don’t know if they are 85 and up, go ask if they are registered,” Drouin said. “We have to get the elderly vaccinated.”