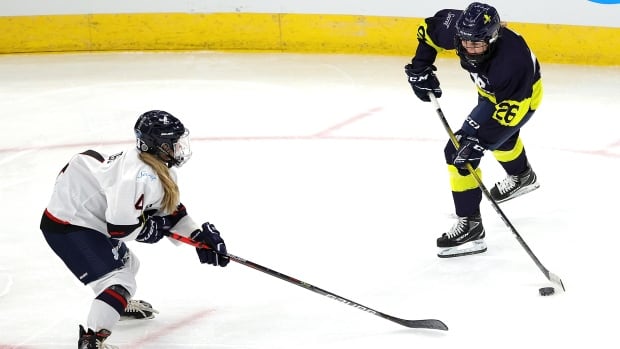 A pair of power play goals in the second period put Minnesota up 3-1, and the team poured on the pressure in the third period to secure the win. Minnesota forward Hilary Knight led the way with a pair of goals, while Kelly Pannek also notched a goal and an assist on the power play for Minnesota.

The game was the second in a weekend series in partnership with Chicago’s NHL team, with Minnesota claiming a 4-1 victory in Friday’s nationally televised opening game at the United Center.

With Sunday’s victory, Minnesota won their second consecutive Dream Gap Tour showcase after winning on points in New York in February. The scoring system for the U.S. showcases on the tour awards two points for a win, but teams are also awarded points for hat tricks, shutouts and for scoring five or more goals in a game.

Minnesota came out strong from the opening whistle and quickly established momentum with a strong first period. Kendall Coyne Schofield put Minnesota up early with an unassisted goal on just the team’s fourth shot of the game.

The 28-year-old Illinois native has scored in every game of this year’s Dream Gap Tour, tallying four goals and a assist in four games.

New Hampshire tied the game up later in the opening frame when Haley Skarupa tucked a backhander past goaltender Maddie Rooney for her second goal of the tour.

New Hampshire’s Katie Burt came up with several big saves in the final minute of the period to keep things even. The 24-year-old goalie later denied Coyne Schofield from point-blank range early in the second period.

Minnesota took the lead midway through the second period after Pannek scored on the power play with a one-timer  set up by Anne Pankowski.

Minnesota struck again four minutes later with another power play goal, this time on a wrister from defenceman Lee Stecklein for her first point of the tour. Pannek and Cameranesi assisted on the insurance marker.

New Hampshire got on the board again four minutes into the third period when Amanda Kessel collected her second goal and fourth point of the tour, cutting Minnesota’s lead to a single goal.

Burt kept her team alive with under 10 minutes to go in the third with another highlight reel save on a 2-on-1 opportunity, but New Hampshire was unable to gain ground against sustained pressure from Minnesota.

Knight added her second goal of the game with five seconds remaining in regulation time.

The PWHPA is divided into five training regions, with centres in Minnesota, New Hampshire, Toronto, Calgary and Montreal. But only the two American rosters took part in the opening pair of showcases for the 2021 Dream Gap Tour due to COVID-19 restrictions.

Its goal is to establish a new professional women’s league in North America, one that is ideally backed by the NHL in order to ensure a sustainable economic model.

The New York Rangers hosted the first two games of this year’s tour on Feb. 27-28, where both teams came away with a win. The opening game of the tour was played at the historic Madison Square Garden, and it was also nationally televised in both the U.S. and Canada

The PWHPA announced a partnership with the Toronto Maple Leafs last month, with a future Dream Gap Tour game set to take place in Toronto once Canadian Government regulations allow. The NHL club will also provide enhanced marketing coordination and support, along with sponsorship consulting.

Increasing visibility to new audiences while also showcasing an elite level of talent, the Dream Gap Tour continues to show how bright the future of women’s professional hockey can be.