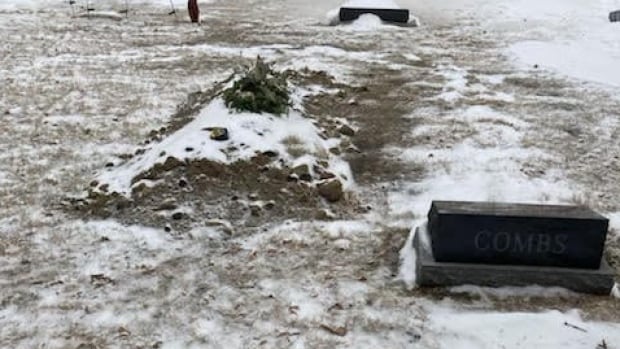 A Manitoba family is heartbroken after being asked to exhume their loved one’s body, because he was mistakenly buried in a previously sold cemetery plot earlier this month.

“It’s just reopening the wounds that were just starting close,” said Angela Griffith, whose 62-year-old father, Dan Griffith, died in his home in Deloraine, Man. — about 250 kilometres southwest of Winnipeg — on Christmas Day.

The family held a small graveside burial on Jan. 4, Griffith said. They couldn’t have a full funeral due to pandemic restrictions.

Ten days later, the Griffiths were notified by the Municipality of Deloraine-Winchester that the plot their dad was buried in was sold to them by mistake, and that it, along with two adjacent plots, had previously been sold.

Griffith said she was told the family that had originally bought the plots was asked to pick another area, but they refused and wanted Dan’s body dug up and relocated instead.

Murray Combs’s mother bought four plots, including the one where Dan Griffith is now buried, in 2006. Combs’s parents are buried in one, and the three remaining plots are for him and his two brothers.

“The burial that took place recently is in the very first plot beside my mom and dad, and there’s really no more room to put the other three,” said Combs.

Combs described the mix-up as unfortunate and something that never should have happened. He said his family’s arrangements were made 14 years ago.

“I certainly don’t blame the other family a bit. It’s not their fault either. Apparently they have a legal document to the same piece of ground,” he said.

There are no easy solutions for either family, he acknowledges.

“What do we do? Do we dig up my mom and dad’s plot too? Is that what they expect?” he said. “It’s a terrible mistake, but mistakes get made and somebody has to be responsible.”

He said he hasn’t heard anything more from the municipality on possible solutions.

While Griffith’s arrangements were made through a local funeral home, the Municipality of Deloraine-Winchester is responsible for running the cemetery and selling the plots.

CBC reached out to various municipal officials for comment but did not receive a response.

Griffith said she was only told that a mapping error led to the mistake.

“I’m still trying to wrap my head around how such a big mistake happens,” said Griffith.

Cemetery staff offered to pay for a new plot and cover the costs of moving Dan’s body, but the family is uncomfortable with the idea of disturbing his grave, she said.

“We just laid him to rest, and now we have to deal with the stress of trying to figure out, do we have to exhume our father?”

Griffith says while her father was not Indigenous, she and her siblings are Métis, and she has cultural concerns about moving him.

“Even from a cultural standpoint, [we’re] wondering what’s going to happen to his spirit, you know, when we dig him up, if we have to,” said Griffith.

Griffith said her dad was a carpenter who worked hard his whole life and was well known in the area.

While his grave does not yet have a tombstone, she said her son has marked it with a carpenter’s measuring tape — something Dan Griffith always had hanging from his belt.

“My dad never took a day off his whole life. He worked every single day and literally, I know it’s cliché, but my dad would do anything for anybody, and if anyone deserves to be resting in peace it’s him,” said Griffith.

The family is seeking legal advice on how to proceed.

“We’re not going to willingly exhume him,” she said.

She said she understands the Combs family is also upset, but hopes they can find a solution.

“Just try to understand the pain and how much it just stresses us out, and rips our hearts open to have to think about even exhuming our father.”