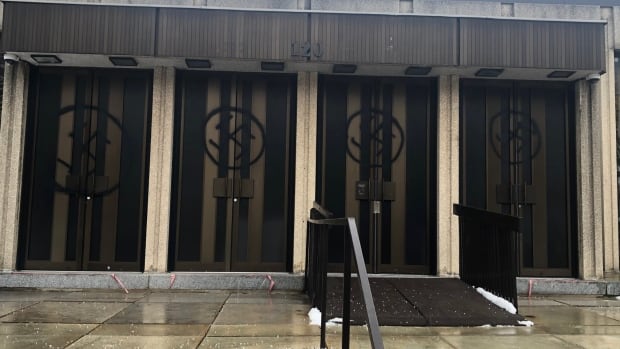 The 28-year-old man accused of painting swastikas on the doors of a Westmount synagogue last month has been declared not criminally responsible for his actions.

Adam Riga had faced charges such as uttering threats and possession of an incendiary device after the Congregation Shaar Hashomayim on Côte-Saint-Antoine Road was vandalized.

Along with spray paint, he allegedly brought a gas can to the synagogue in the middle of the day.

“A verdict of not criminally responsible on account of mental disorder has been rendered in respect of the accused,” said Crown spokesperson Audrey Roy-Cloutier on Friday.

The Jan. 13 incident was captured on surveillance footage and was stopped when a security guard intervened. Montreal police were called, and an arrest was made without a struggle.

Nobody was injured and the graffiti was removed quickly.

Jewish groups and municipal politicians spoke out strongly against attack on the synagogue, with people like Montreal Coun. Lionel Perez calling it a hate crime.