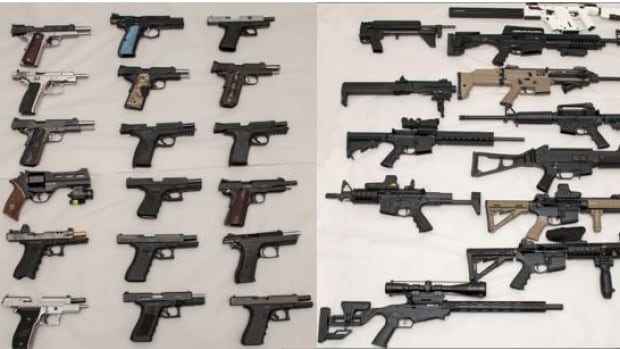 A 51-year-old man is facing multiple charges after police officers allegedly found numerous firearms, ammunition and drugs in a vehicle during a traffic stop in Mississauga in June.

In a news release issued Tuesday, Peel police said officers pulled over a Collingwood man in the afternoon of June 25 in the area of City Centre Drive and Robert Speck Parkway and seized two firearms, two airsoft imitation firearms, ammunition and Fentanyl.

The next day, police executed search warrants at a residence in Toronto and at a home in Collingwood.

They found one pistol and four long guns at the Toronto residence, according to the news release.

Eighteen pistols and 11 long guns were found at the home in Collingwood, along with a “suspicious package,” police say.

The OPP Emergency Response Unit and the OPP Explosives Disposal Unit attended the scene and evacuated several homes in the area for safety concerns. The package was later deemed not to be a threat.

A 51-year-old man has been charged with multiple firearm and drug offences, including possession of a weapon for dangerous purposes, and possession of an opioid.

Peel police are asking anyone with information to contact their 11 Division Criminal Investigation Bureau or anonymously through Peel Crime Stoppers.