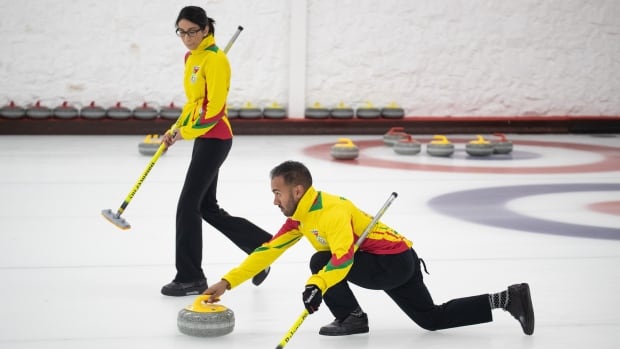 About a decade ago, Rayad Husain was interviewed for a story in one of Canada’s national newspapers about why curling was still lacking diversity.

The story came on the heels of a study released in January 2011 in which University of Waterloo professor Heather Mair took a close look at issues of diversity in Toronto’s curling clubs – the paper found curling officials needed to make it easier for newcomers to find out about the sport.

Husain, 35, is of Guyanese descent and was born and raised in Toronto. He said then it was no secret curling was a white person’s sport.

“I don’t know what to say. Across the board it’s still pretty dire. Not much has changed at all,” Husain said.

Husain has been curling out of the Chinguacousy Curling Club in Brampton, Ont., for nearly two decades. He said he saw the sport for the first time when he was 11 years old while his dad was flipping through the TV channels.

He also said Rudy Ramcharan, a Trinidadian curler who won a Brier with Kevin Martin in 1997, played a big role in growing his interest in curling.

“Rudy was all over our Caribbean newspapers,” Husain said. “That spurred a lot of conversation. It’s a matter of seeing your own playing it.”

Husain now represents Guyana at world curling events. He hopes his being on the ice will help others like him to want to take up the sport.

Curling Canada is also trying to figure out ways to attract newcomers and people of different ethnicity to curling.

“I’m motivated to do something probably more so now than ever,” Curling Canada CEO Katherine Henderson said to CBC Sports.

Henderson took over as CEO in 2016 and has been a driving force in creating change within Curling Canada. She achieved pay equalization between the Brier and Scotties last season and now has her sights set on attracting more diversity to curling.

She knows it won’t be easy and says she’s in a listening and researching mode right now trying to understand how to better serve ethnic communities.

“What we want is a sports system in which everyone is welcome and where all perspectives are honoured,” she said. “We have a long history about being inclusive but we need to be more intentional about reaching out.”

Henderson points to curling’s roots in Canada beginning in farming and rural communities and that the sport is deeply entrenched in tradition and legacy – Henderson says even the language used around curling can be isolating to many groups.

“Curling is highly overdeveloped in Canada but very overdeveloped in rural farming communities,” she said. “I think even simple things like calling curling centres ‘clubs.’ This is a centre where people curl. Getting away from words like members and clubs.”

As attendance at curling events over the last decade in Canada has dropped and diversity continues to be an issue, Henderson says it’s the immigrant population in the country that will not only save the sport but take it to a new plateau.

Henderson is optimistic the work they’re doing now through programs like Rocks and Rings, which exposes up to a quarter of a million children to curling in schools every year, will pay dividends in the years to come.

“What we’ve been doing over the last number of years, especially since I’ve been here, is really doubling down and spending a lot of money to make sure any kid that wants to curl, can do so,” she said.

While it all sounds good, Richard Norman remains skeptical.

“Curling Canada has its work cut out for it,” he said.

“Curling Canada needs to take action. It can’t just be, ‘we need to save the sport by having new immigrants.’ What are they really doing to encourage connections with those communities and understanding what they need?”

“When you start to look at curling, those things start to jump out quite plainly,” he said.

Norman says from bagpipes to Victorian values to Scottish paraphernalia hanging in curling clubs, there are a number of deeply ingrained traditions white people don’t even consider when they think about the sport but can be a barrier to people who are racialized.

“It’s not to say bagpipes in and of themselves are oppressive, but what that represents to somebody who is not Scottish – doesn’t have any European background – looking at this and saying, ‘this is now one of the traditions I have to participate in,’ is not reflective of my background at all,” Norman said.

“We have to take a look at how the dominant whiteness within Canada is still prevalent today. It’s not to say we’re carrying this forward in curling in a specific way, it’s really to say it’s deeply entrenched in Canada and there’s a certain level of privilege that happens within it.”

Norman says while the curling community has been having conversations around diversity, it’s challenged by how to address it.

Norman adds discussing race brings a level of defensiveness, but says that’s where the conversation needs to start.

“For example, as a Black man, if I’m sitting in a curling club and having a conversation with someone and they say, ‘I don’t care what colour you are,’ they don’t realize it has a racial overtone that they don’t intend. You can’t just say these things. There’s lots of work to do.”

Curling and the people who love the sport, like society, are having to look inward at inclusivity and systemic racism – and while Norman says the language and optics of curling have always centred around welcoming everyone, it hasn’t lived up to that mission.

“It’s about listening, respecting and honouring those communities and their needs.”