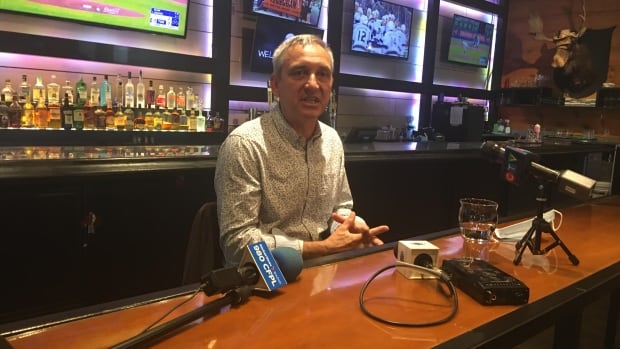 A group of downtown London bar and restaurant owners say last week’s news of a COVID-19 outbreak among young people, mainly Western University students, dealt a devastating blow to their bottom line and unfairly painted Richmond Row as a “hotbed” of coronavirus transmission.

A group of about a dozen businesses owners called members of the media to a news conference Tuesday at Toboggan Brewing Company on Richmond Street. Their message: That they’re strictly following the province’s operating rules and need the community’s support to prevent widespread business closures and job losses.

Jerry Pribil, owner of Chaucer’s Pub and Marienbad Restaurant, said after months of taking careful steps to reopen, and enjoying a slow but steady return of customers, last week’s news had an immediate chill on business.

“We somehow lost the consumer confidence,” he said. “We were on a great path and we want to stay on this path. We started to see the light at the end of the tunnel.”

London businesses were allowed to re-open their doors to drinkers and diners when the province moved to Stage 3 of its economic recovery plan in mid-July.

Most of the business owners say they’ve made painstaking and expensive changes to ensure their businesses comply with rules in place to curb the spread of coronavirus. They’re hired extra staff, put up Plexiglass barriers and limited the number of patrons to ensure everyone who didn’t arrive together could stay two metres apart. They’ve stepped up cleaning and in some cases built outdoor patios.

Business owners who spoke to CBC News at Tuesday’s news conference said they were thankful for the support shown by Londoners during the outbreak but said that support must continue in order to prevent more business closures.

Scott Crawford, owner of The Bungalow restaurant in Old North, says a return to more restrictions would be a mistake.

“I’m really not happy when I hear that kind of thing,” he said. “We’re doing everything that our health unit has told us to do. Everyone is wearing masks … we’re sanitizing and distancing. I don’t know how we could do more than what we’re doing right now.”

Crawford said he’d rather see province target “rogue businesses that operate without regard to protocol, that put profits ahead of community safety.”

Mike Smith, owner of Fellini Koolini’s and Joe Kool’s is more blunt about what more restrictions would mean.

“If a [closure] happens, you will not have a hospitality industry,” he said. “Our hotels will close, restaurants will close. This isn’t just a blip. Places are falling off the map right now and will continue to do so.”

‘People are scared to come downtown’

Pamela Parker-Lansdowne and her family own The Tasting Room on Richmond Row. The restaurant reopened on Sept. 8. After a steady first week, business “plummeted” at news of the Western outbreak.

“People are scared to come downtown,” she said.

Parker-Lansdowne said most businesses are following the rules.

“If all the businesses follow the protocol, they can make it a really safe experience.”

Dr. Alex Summers, London’s associate medical officer of health, said most transmission of COVID-19 is happening at unregulated social gatherings, not at bars or restaurants.

He says while bars and restaurants are “potential sources of transmission” because they bring people together, they can be safe if business owners and their patrons follow the rules.

“Going to a bar isn’t like going to a bar used to be,” he said. “People have to be seated with the group they came with, they’re not able to go up and back to the bar for a drink. So those places look very different than people might imagine. If bars and restaurants follow the rules, then we should see little risk in those settings.”