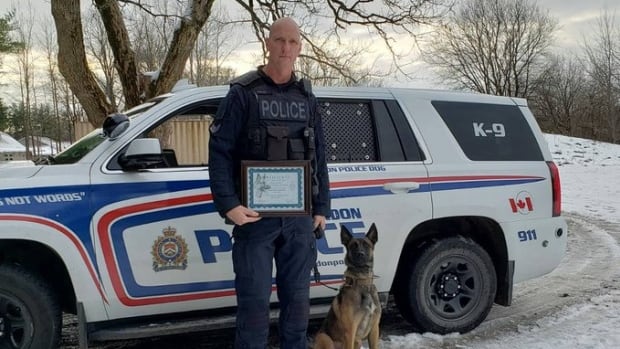 The London Police Service (LPS) has added a new member to its canine unit and his name is Carl.

Carl is a 1.5-yr old shepherd Malinois cross who underwent several weeks of training and is now able to detect explosive materials, such as dynamite.

The LPS has four dogs trained in explosives detection, and Carl’s handler says they are absolutely integral to the force.

“Let’s say someone calls in a suspicious package, wherever it may be, and they don’t know what it is. As opposed to having our officers go toward it, they’ll send the dog past it and then use his training to see if he responds or not,” says Sgt. Travis Whinges.

The police officer was partnered with Carl last September and he describes the dog as sociable and full of energy.

The pair live together, and though Carl sleeps in his own kennel and not on the bed, Whinges says Carl is already a beloved member of the family.

Carl’s working life could be about seven years, as Whinges says detector dogs are less prone to injury because there’s no “jumping over fences.” He hopes they’ll be partners for as long as Carl is part of the force.

This is the second time Sgt. Whinges has worked with a police dog, and he says it’s a fun job that you just can’t beat.

Listen to the full interview here: