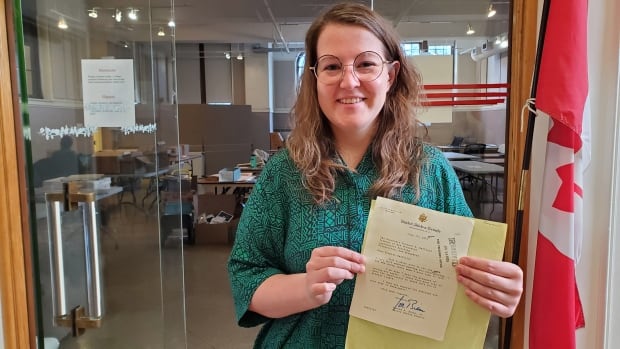 As an intern at the Provincial Archives of New Brunswick, Kate McGregor has been spending weeks sorting, labelling, and properly archiving the personal correspondence of former premier Richard Hatfield.

It consists of around 150 boxes of documents, many about events a half-century ago.

But on Thursday morning, McGregor came across a letter with a timely connection to world events today.

“This morning I came across a letter, and Hatfield’s response, from senator Joe Biden,” said McGregor.

Biden wrote his letter, dated July 10, 1973, after briefly meeting with Hatfield in Washington, where the premier took in some of the infamous Watergate hearings.

“Dear Premier Hatfield,” the recently sworn-in senator wrote. “Just a short note to let you know I very much enjoyed meeting you this morning and was sorry there wasn’t more time to talk. I do hope I have the pleasure of seeing you again. I would very much like to have the opportunity to speak with you at greater length. I hope you enjoyed the hearings and your stay in Washington.

The letter took McGregor by surprise, especially since the Democrat and former vice-president has a chance of becoming the next U.S. president.

“I looked up the full name just to make sure it was him, because you wouldn’t think that one of the current people running for president would write to the premier of New Brunswick.”

The 47-year-old letter would have been written by Biden when he was 30 years old, six months after he arrived in the U.S. Senate.

Hatfield, who was in the third of his 17 years as premier, became known for his travels outside the province. He would have jumped at the chance to sit in on the hearings, which helped bring about the downfall of then-president Richard Nixon.

“Dear Senator Biden: Thank you for your note. I wanted to take this opportunity to let you know how thoroughly I enjoyed the opportunity of being present for the Watergate hearing. I hope that we will have an opportunity to get together in the near future. Sincerely, Richard Hatfield.”

McGregor said the letters will be categorized, catalogued and archived for future reference and research.

And with the U.S. election in just four days, it won’t be long before we’ll know whether Biden’s letter is from a future failed presidential candidate or victor over President Donald Trump.