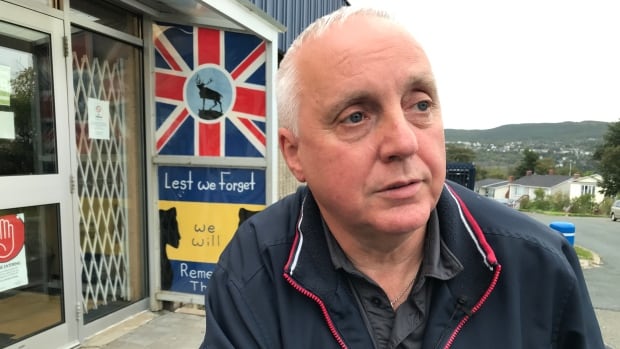 The body that oversees the 45 Royal Canadian Legion branches in Newfoundland and Labrador is predicting a dire situation unless financial help arrives.

“22 [branches] are on the verge of going down. And we’re doing everything in our power to help those smaller branches out,” said Nathan Lehr, N.L. provincial command president and Pasadena resident.

Even the biggest branches, including Branch 1 in St. John’s, have fallen on hard times.

Physical distancing rules have practically stripped these clubs of their ability to generate much-needed cash, with events like dances, anniversaries, dart leagues and bingo either gone completely, or held in such limited fashion that they often lose money.

“It’s been devastating to Branch 1, and I guess to all the branches around the province and across the country,” said Grenning, a 40-year member of the legion. His father, the late John Grenning, also served as branch president, after fighting in Korea with the Canadian military.

“He’d be devastated,” Greg Grenning answered when asked what his father would think of the current situation.

From helping others, to being in need

The legion movement took root in Newfoundland and Labrador after the First World War, and is steeped in the province’s sobering military history.

It has long provided supports for veterans and their families, cadet and other youth organizations, and served as a safe harbour for veterans, associate members and guests to socialize in an environment dedicated to the memory of those who served in the military, and often made the supreme sacrifice.

But in a unusual turn of events, the legion itself is now looking for help, and unless there’s some miraculous turnaround Nathan Lehr sees a very dire future for the legion movement.

“Unless we get a boost of some sort, we’re going to be losing some smaller branches, and possibly a couple of the big ones as well,” he said, acknowledging that some branches were teetering on the brink prior to the pandemic.

The legion’s national leadership has — so far — unsuccessfully lobbied for federal government aid, predicting 1 in 10 of its branches across Canada would close due to the pandemic.

And following an emergency meeting in St. John’s this past weekend that brought together the top brass with the provincial command, a letter asking for help is also on its way to Premier Andrew Furey.

“I hate to beg, honest to God almighty, because we’re the ones that usually help out everybody. But all we need is just to keep our buildings going. And that’s it,” said Lehr.

Prior to the pandemic, it would be common on a Saturday night for up to 200 revelers to be celebrating in the main hall at Branch 1, with dozens more in other parts of the building, said Grenning.

But countless events have been cancelled and deposits refunded in recent months, with staff losing their jobs or having their hours slashed.

“I loved my job from the day I came here. And I still love my job right now. And I’d hate to see the Legion close up for any reason at all,” said bartender Mary Osmond, who has worked at Branch 1 for 38 years.

Grenning and his fellow legionnaires have come up with creative ways to pay the bills, including takeout meals on Sundays and Wednesdays, and a parking lot bingo.

But the situation is far less upbeat for nearly two dozen branches that have yet to reopen their doors since the COVID-19 lockdown practically brought society to a halt in March.

Lehr said there is plenty of fighting spirit left in those struggling the keep the branches open, but he admits pride and service won’t pay the bills.

And a feared second COVID lockdown could spell the end, a scenario Lehr said must be avoided at all costs.

“When the need was there we’d always step up. Now we’re into a situation where we’re having problems. Just a little assistance is all we need. We’re not giving up,” he said.