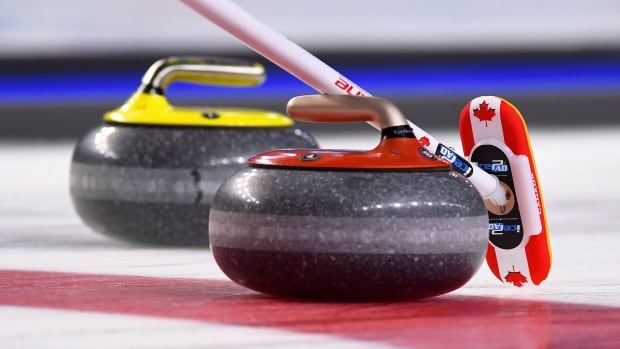 The start of this year’s curling season will look a little different on the ice, and one Edmonton area club has already tested out the new game rules.

The Leduc Curling Club was the first in Alberta to open up its ice sheets to curlers, with community club games resuming in mid-August.

At first, general manager Daryl Huff wasn’t sure how the reopening would go.

“Curling is a social game and [curlers] can’t congregate and can’t meet like we used to so I have had to be the fun police myself,” Huff told CBC’s Radio Active on Monday.

“But what I found was curlers would be willing to do what it takes to play the game.”

That includes losing one sweeper and standing at markings on the ice,  which helps keep people six feet apart as per the Curling Alberta and Curling Canada return-to-play guidelines, Huff said.

There are eight people on the ice at once and a lot of the touchpoints like benches have been removed, he said.

“You only really touch your own rocks. You usually did this in the past and now that’s really enforced.”

The club also requires people to put their information on a form and complete an Alberta Health daily checklist to help reduce the risk of transmission of COVID-19 among attendees.

“We know exactly who has been in our building,” Huff said, adding the club has also lowered how many people can be in their facility.

He said many curlers are happy to be back on the ice after the curling season was cut short in Canada due to the COVID-19 pandemic.

One of the earliest outbreaks in the country was linked to an Edmonton bonspiel, where 13 people contracted COVID-19.

Six months later, curlers are learning how to play a modified version of the classic sport, as clubs across the country slowly reopen.

“We didn’t know how it was going to work out,” he said.

“I don’t see a whole lot of difference … We’ve had to adapt but everyone is, too.”