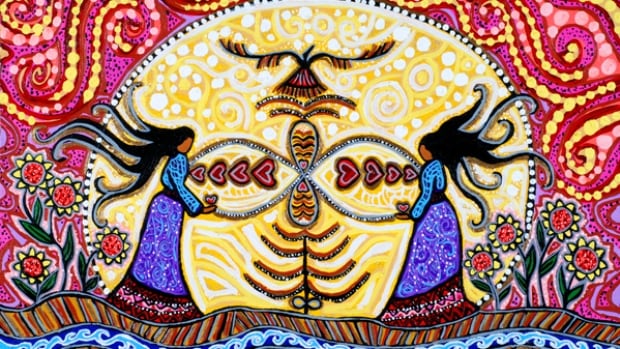 Canadian Geographic and Métis Nation-Saskatchewan (MN-S) have joined forces on a first-of-its-kind podcast that hopes to breathe life into the endangered Michif language through a lens that is authentically Métis.

Hosted by Métis artist, mentor and author Leah Dorion, the first 10 episodes of Paykiiwikay give listeners an intimate glimpse of the cultural driving force behind Métis communities in Saskatchewan.

“Paykiiwikay is the Métis word for ‘come and visit.’ And that’s what it is. Coming to the table and visiting, even though it was virtually recorded,” Dorion said.

Dorion traces her roots back to Cumberland House and has lived in Prince Albert most of her life. She said hosting the podcast is helping her learn the Michif language and connect with her own heritage.

“I’ve made such a commitment to start to practice some of the phrases. It is on the endangered languages list. So I’ve been promoting it and talking with people about the language, picking up some of the vocab and working on it myself,” Dorion said.

The podcast features Métis music, history and cuisine. It touches on difficult topics such as racism, historical injustice and assimilation all while showcasing the Michif language.

Dorion said the series will help the community “really understand the role of the Métis people in founding Saskatchewan and are still contributing to Saskatchewan in a good way.”

“Everything Métis people do is tied to our value systems, beliefs, and respect,” McLennan said. “This podcast series will help teach others about the rich Métis history that is an integral part of the makeup of this province.”

The series is produced by veteran broadcast journalist and foreign correspondent David McGuffin.

“I am proud of my Métis roots, which date back to the fur trade. Like too many Canadians, my understanding of the story of the Métis people faded out at the Battle of Batoche and the defeat of Louis Riel,” McGuffin said.

“Working on Paykiiwikay has been one of the highlights of my broadcast career.”

Talking about Michif, Dorion quotes Fayant, who says, ‘I believe it is the language of reconciliation because it incorporates diverse world views of settler society as well as the Indigenous community in equal parts.’

Future guests include Métis musician and actress Andrea Menard and Elder Norman Fleury. Dorion said the partnership between Canadian Geographic and MN-S is an act of coming together in itself.

“I’ve never seen a partnership like this. It’s a cool model that shows reconciliation and partnership can work…. It can promote culture and allow the community members a voice, an authentic voice,” Dorion said.

“I think there’s a lot to be learned and lots of opportunity to really get our minds wrapped around reconciliation and what it can look like.”

Canadian Geographic publisher Gilles Gagnier said the podcasts are bringing important stories about Métis history, language and culture to the forefront and expressed gratitude for being invited to participate.

“Canadian Geographic is proud to be a partner of MN-S and honoured to have been chosen to collaborate on this exciting project,” Gagnier said.

Dorion said podcasting is “a first” for her and the platform has opened her eyes to new ways of engaging with an audience, especially amid the COVID-19 pandemic.

“I’ve always been invited to tell Métis stories and I use whatever medium I can, but this is a first for me,” Dorion said.

For the first episodes, the team focused on bringing in diverse voices from Métis communities around Saskatchewan and especially those of elders.

“The priority was to get some of the older generation … to get their voices in there,” Dorion said.

She said interest in the series has been good and the audience is growing by the day.

“We’ve had people listening and tuning in all over the province. So, it’s nice the northern communities are getting to be aware of it — central and southern communities, too. Wherever there’s Métis people,” Dorion said.

“The general public is also encouraged to listen. It’s like having tea and listening to Métis people who carry specific cultural knowledge and just having a visit with them. You get insight into what they do, why they do what they do, and the different cultural gifts that they have, and talents “

Episodes can be streamed on Apple Music, Google Play, Amazon Music, Spotify or SoundCloud and are uploaded weekly to Canadian Geographic’s website.

“Every week a new guest will pop up. So people can follow us for the 10 weeks and listen to every episode each week. That’s the challenge,” Dorion said.