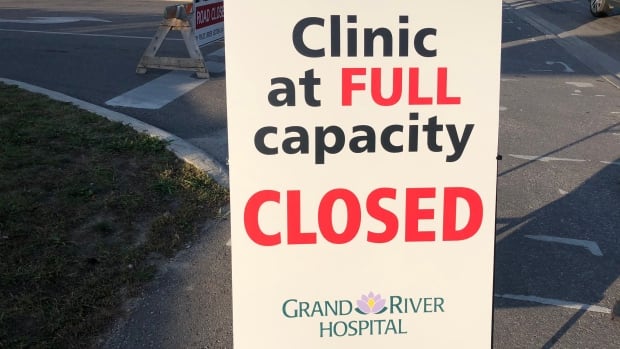 The drive-thru COVID-19 testing centre in Kitchener had reached capacity by the time it opened at 7:30 a.m.

Grand River Hospital, which runs the drive-thru centre, tweeted at about 7:15 a.m. that the centre had reached capacity. The drive-thru opens at 7:30 a.m.

“We will be asking those who arrive to leave. We cannot estimate when we will take new arrivals,” the hospital tweeted.

In tweets on Tuesday, the hospital said it understood people were frustrated by being turned away for testing.

“Due to the extremely high volumes we are seeing at our drive-thru testing clinic, we are reaching capacity throughout the day and need to turn individuals away,” the hospital said.

The centre is located in the parking lot of Catalyst 137 on Glasgow Street. The roads near Glasgow Street and Belmont Avenue were blocked with people trying to get into the drive-thru centre.

Waterloo regional police warned about the high number of vehicles in the area and asked people to avoid the area.

Some reports on social media said people had lined up for the drive-thru site as early as 5 a.m.

So glad we got up at 5, got turned away and then told to come back later. Ffs. Day two of trying to get a test… one kid with a sore throat and we are all home from work and school. Let’s get this show on the road <a href=”https://twitter.com/fordnation?ref_src=twsrc%5Etfw”>@fordnation</a>!

This isn’t even the full lineup of cars on Glasgow this morning but you get the picture. Very busy! <a href=”https://t.co/d3Fw8nCZn3″>pic.twitter.com/d3Fw8nCZn3</a>

Cars lined up with people waiting since 5-6am down to the end of Eden Avenue. Cars lining Glasgow, both directions. It’s crazy. <a href=”https://t.co/1t2pRGSR8r”>pic.twitter.com/1t2pRGSR8r</a>

Brad Goodman got to the Catalyst testing site on foot when it opened. Was turned away. He doesn’t drive and says he doesn’t have any other good options to get a test. <a href=”https://t.co/b9iJbPyDOY”>pic.twitter.com/b9iJbPyDOY</a>

Last week, the hospital said the drive-thru was being closed several times during the day as it reached capacity.

“It does happen and there’s not much we can do about it once our overflow parking is full, we have to turn people away,” hospital spokesperson Cheryl Evans said at the time.

She said they have to turn people away to maintain access to the site for staff and also to keep people safe.

The drive-thru site was built to handle 350 vehicles a day. The staff at the site have averaged 550 tests each day in recent weeks.