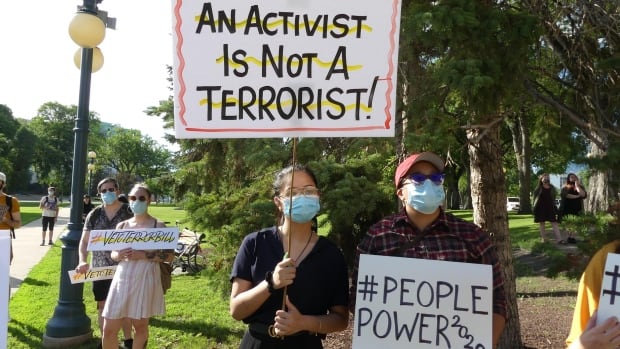 About 60 Winnipeggers gathered outside the legislature Tuesday night to protest a new anti-terrorism law in the Philippines.

“It’s an encroachment on human rights and essentially it’s showing inklings of dictatorship that has happened in the past,” said Ally Gonzalo, spokesperson for Diaspora Against Dictatorship, the group that led the demonstration.

The Anti-Terrorism Act, signed by Philippine President Rodrigo Duterte last week, has drawn the ire of Filipinos around the world. Critics argue the act could silence dissent.

The law would give the government there sweeping powers to classify someone as a terrorist based on a variety of factors, including what they say or post online. Some worry the law could be applied beyond the borders of the Philippines against former residents living abroad.

Human rights groups have staged protests in recent days and lawyers have questioned the validity of the law in the Philippines’ Supreme Court.

For the first time on Tuesday (Wednesday in the Philippines), Duterte addressed the controversy. He suggested Filipinos need not fear the anti-terrorism law.

“For the law-abiding citizen of this country, I am addressing you with all sincerity, do not be afraid if you are not a terrorist,” he said on a televised news conference, according to Reuters reports.

He said communists are among the terrorists the act targets.

Gonzalo said the act, which amends the previous Human Security Act, expands the definition of terrorism. He said the act may encompass anyone who expresses political dissent, which could be anything from donating money to an organization the government doesn’t approve of, to sharing something critical of the current administration online.

The creation of the law was coupled with the formation of a council appointed by the president. That council can label someone or a group a terrorist and detain them for up to 24 days. The law also allows for up to 90 days of wire-taps and surveillance on those suspected of terrorism. Punishments under the act include life in prison with no parole.

Police and the military have had their power bolstered under the law, Gonzalo said.

“They are also given the choice of whether a person or a group of people are practising dissent, and they get to choose who the terrorist is,” Gonzalo told Up to Speed guest host Marjorie Dowhos Tuesday afternoon.

Gonzalo said the act feels like “history repeating itself,” referring to the dictatorship of former president Ferdinand Marcos. He placed the country under martial law for 14 years until he was exiled in 1986.

The recent case of Philippine journalist Maria Ressa, who was convicted of libel last month and given a six-year jail sentence, is also concerning, said Gonzalo.

“It scares me because when Marcos was a dictator he silenced journalists, he enforced disappearances.”.

Gonzalo has been living in Winnipeg since 2016. One of his great fears is that people like him who criticize the Philippine government could be barred from ever coming back.

He still feels an obligation to speak up.

“That obligation to do that, to defend the rights of the oppressed, marginalized and othered, outweighs the fear,” he said.

“Because of social media, we are no longer just helpless and standing from afar, watching,” he said.

“The people in the Philippines, they don’t want to risk being red-tagged or imprisoned or suspected as terrorists.… We can do something about it.”