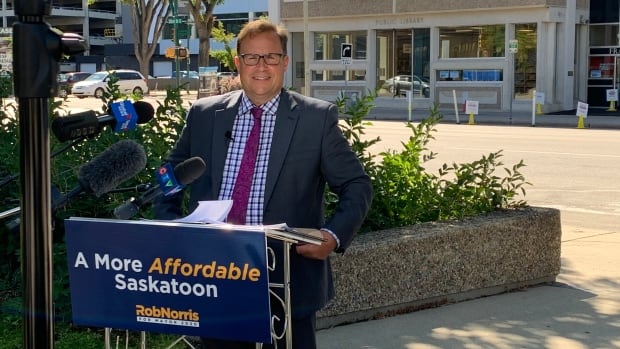 Saskatoon mayoral contender Rob Norris is pledging to lead a re-vote at city council on already-approved borrowing for a new $134-million downtown library.

But a former city solicitor says it’s unclear whether such a reversal is even possible, as arguments could be made either way.

“It’s not a simple yes or no answer,” said Patricia Warwick.

Last November, city councillors voted 6-5 to approve up to $67.5 million in borrowing for the development and construction of a new downtown library on 2nd Avenue N. A final approval took place in January. The city will borrow the money on behalf of the Saskatoon Public Library (SPL) board, which has direct authority over the project and hopes to open the new building in 2026.

Early in his campaign, Norris announced his desire to “shelve” the project under its current price tag by seeking to revoke approval of the borrowing.

He suggested the total project budget could be trimmed by as much as $100 million in light of the financial pressures of COVID-19.

“This is going to form part of the ballot question,” Norris said.

‘Likely be out of order, or not legal’: Donauer

Doubts persist about viability of Norris’ plan, however.

“I’m not sure that a motion to rescind the approval….would be procedurally possible,” Ward 7 Coun. Mairin Loewen said this week.

Loewen and Yelland both pointed to city council’s procedures and committees bylaw (Section 64), which says motions can’t be rescinded “when action on the motion has been carried out in a way that cannot be undone.”

The library board has already spent $9 million to purchase the downtown lot and more than $20 million on signed contracts, according to an SPL spokesperson.

“Because the SPL has taken action on the approval, I’m not sure that it’s ‘rescindable’ at this point,” Loewen said.

“I don’t think such a motion would be in order in accordance with the procedures bylaw,” said Ward 2 Coun. Hilary Gough. “And [I] don’t think it’s productive to speculate about votes that are far from likely to arise.”

Ward 5 Coun. Randy Donauer was one of five councillors who voted against approving the up to $67.5 million in borrowing.

“However, I suspect any motion to rescind will likely be out of order, or not legal,” Donauer said, pointing to the actions already taken by the library board.

What the lawyers say

Yelland declined to comment directly on the viability of Norris’ plan to CBC News.

“Without a direction from council to do so, I would not investigate to determine whether actions had been taken that would make it impossible to rescind the motion,” Yelland said.

Patricia Warwick, the former city solicitor, said two arguments could be made, depending on how the procedures bylaw is interpreted.

Under the first scenario, “the November and January resolutions can be rescinded because the city itself has not taken any action on the resolutions which cannot be undone,” Warwick said.

According to the city, no external borrowing has actually taken place yet.

“The funding plan for the new central library uses the borrowing at later stages of the project, so a draw on the loan has not been made,” said SPL spokesperson Janna Sampson. “At this point, the project is advancing using the library’s reserve funds.”

Under the second line of argument outlined by Warwick, “The November and January resolutions cannot be rescinded because the SPL board has already taken action on the resolution,” Warwick said.

Mayor Charlie Clark, who is seeking a second term, said rescinding could bring “significant legal, financial and procedural risks,” given the work done so far.

“They [SPL] have purchased land, entered into contracts, and spent significant time and effort moving forward with the project, in good faith,” Clark said.

City council could request Yelland to formally rule on whether a rescinding is possible, but councillors are under no obligation to seek that advice, according to the city.

Former mayor Don Atchison, who is looking to reclaim his seat after being defeated by Clark in 2016, said it would be bad for council to forgo that advice.

“This is why you have a solicitor to give professional advice.  Who on council is a member of the bar?” he said.

Donauer agreed a legal opinion would be advisable.

“Otherwise, it will be creating quite a stir about something that may not be possible,” he said.

Norris’ campaign team maintains the borrowing approval can be cancelled.

“Based on the advice, we believe it can be rescinded,” Richardson said.

Carol Reynolds, a rival for Loewen’s seat in Ward 7, has said she would also vote to rescind the motion. She said the cost of the library project is the single biggest issue people have raised with her.

But at her first campaign news event on Wednesday, Reynolds said she was not certain whether the rescinding is possible.

“I have folks getting back to me on the rescindment question. That is being investigated,” she said.

Incumbent Ward 1 Coun. Darren Hill said he agreed with the second argument laid out by Warwick: that the motion can’t be rescinded because of actions the SPL board took after council’s borrowing approval.

He said candidates’ talk of rescinding amounts to “political pandering.”

“It is actually quite disgraceful to see it being done,” Hill said. “I think it is just unacceptable that candidates are allowed to throw out these statements that have no substantial possibility of happening or no facts behind them, and that gets people riled up.”

At her campaign event, Reynolds echoed Norris in saying “the cost for the new library seems to have fluctuated since it was announced as well.”

That’s not true, according to Sampson, the SPL spokesperson.

Gough said the “high level” of misinformation being shared is disappointing.

“The vigorous debate and information-sharing that took place last year in the lead-up to council’s decision addressed fully the questions being raised,” she said.

According to Warwick, Norris would need five other councillors to vote in support of rescinding the motion. That’s assuming five other people running in five different wards are elected alongside Norris in the Nov. 9 election.

CBC News reached out to all 32 declared election candidates (so far) to ask if they’d vote in favour of rescinding the motion.

Nine people other than Norris said they would vote “yes,” including candidates running in seven distinct wards. Three respondents said “no.” Some people didn’t say either way. Some expressed concerns about saying “yes” or “no” at this stage.

“This is not a yes or no question. The mayor does not have the authority vested in them to stop the project.  When someone says that, it shows they do not understand how city council functions.”

“While I do think the decision to build a whole new library at this time and in this economy was not the best, we can not backtrack on our promises if we are to have any credibility as a city.”

“If it came back to council to rescind the vote I would be in favour. I still believe we could build something similar to Halifax at half the price tag that majority of council passed.”

“I usually will not say how I will be voting until I’ve seen all the facts. That isn’t fair, nor is it responsible decision making. If you need a yes or no on the rescind I would say ‘yes’….if it is legal.”

“This item was deliberated by council and received approval for its debt financing request. Substantial work has already begun for this project, which I believe would not allow a rescission motion to proceed. I do not plan on revisiting the discussion regarding debt financing. There is still a lot of opportunity for community participation in this project moving forward.”

“I stand behind the decision to approve borrowing for the project for many reasons…. including that the project in today’s context will be an important part of recovery from COVID-19, both because of its economic impact (construction GDP & annual operating thereafter), its stimulating effect on the downtown, and also because of the tremendous supports that library services and spaces provide to the community as a whole, including those who are facing challenges in times of downturn.”

“I’m not giving you an answer to a hypothetical question which is not ever to be a reality because it’s simply not possible.”

“As much as I believe libraries are important, I also believe that what this city is looking at for a new library is far overreaching.”

“I am inclined to gaining all the social services for my municipality and as such I am not debating on things that have been concluded.”

“It would absolutely be my preference to get a determination about whether or not a vote like this would be allowed before declaring how I would proceed. I’m not sure the premise of a ‘yes/no’ question on rescinding support for the library is valid at this stage. “

“The new council will need time to look at all the internal reports to make an informed decision if this is the right time for such a project.”

“I would vote to rescind the present loan and replace it with a smaller loan.”

“The decision to build a new library was made and council doesn’t have full authority over this decision. I feel it would be wise for the library board to extend the completion date and reduce the tax burden over a longer period of time.”

“[Ward residents] are telling me that $134 million is too much to spend on a new library. Residents have also said that now is not the time to be making such a large tax-payer funded purchase.”

“I would rescind it, if it still can be. I think the money they have earmarked for building the new library would be better spent making our current libraries better.”

“My view is the library project needs to be halted for the next year at least.”

“We need to take a long look at megaprojects in the face of an economic downturn caused by the pandemic. Why do we need another jewel of the Prairies, when our most vulnerable are barely hanging on?”