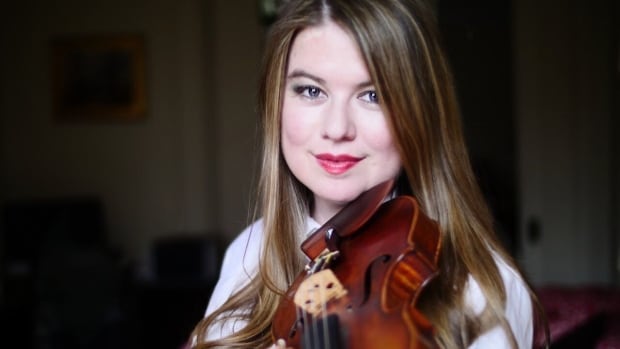 Renowned classical violinist Lara St. John is being vindicated after speaking out about sexual abuse she experienced nearly 35 years ago.

St. John, born and raised in London, Ont., was considered a child prodigy before enrolling in the prestigious Curtis Music Institute in Philadelphia in 1985.

At 14 years old, she was assaulted and raped by her instructor, Jascha Brodsky, who died in 1997. She reported the assault to the school in 1986, and again several times later over the years. She says her claims were disregarded.

After sharing her story in full to the Philadelphia Inquirer last year, the Curtis board commissioned a months-long investigation by the law firm Coven’ O Connor. The report calls her allegations credible.

Lara St. John spoke with Afternoon Drive host, Chris dela Torre. Here is a portion of that conversation, edited for breadth and clarity.

What’s your reaction to the findings of this investigation?

Well, it basically came out as well as I could have possibly have hoped. That being said, it did take 35 years and a hell of a lot of energy, huge newspaper articles, angry alumni, and many other people standing up behind me. Obviously, it’s about 35 years too late, but at least it’s going to improve things for students in the future. I hope then it will have been worthwhile.

What was it like to have to talk extensively about the abuse for this report?

I went back and talked about it a lot in 2019 for the Philadelphia Inquirer article that came out last summer. So, that’s when I started going back in time in great detail. I had, of course, spoken to Curtis and written letters. And while I spoke to them in ’86 and again in 1995 and again in 2013, they never did anything.

That’s when I decided to go public last year. It was especially after watching the Kavanaugh trials. It wasn’t just me, it’s lots of other schools and music institutions where there is a huge imbalance of power where your teacher is basically God and they have the possibility to kick you out at any moment. Even though I did get up the gumption in 1986 with a couple of supportive friends (to report the abuse). And the dean laughed at me. He scoffed. People always say ‘how come women don’t come out about about sexual abuse?’ Well, that’s why.

In a statement, the Curtis Music Institute board has issued an apology to you. It also says it’s establishing a trauma fund as part of a number of recommendations to help other potential victims. What do you make of the school’s response?

Obviously, whatever they do to make it easier for people to get out of horrible positions, the better. But that should have been there ages ago. I mean, they only passed a school law about relationships between teachers and students in 2010. I think they’re kind of stuck in medieval times. Hopefully this brings them a little bit into into the present where women are not cattle.

The Curtis board is also saying they’re open to having a more substantial relationship with you. Could you see yourself ever being closer to that school in some way?

I would say that’s improbable, not impossible, but improbable, Even just to go back to Philadelphia is hard for me, and especially to be anywhere near that area of Center City. I managed last year without being physically ill once, but before that I would actually get sick. So, I don’t I don’t really think that’s a possibility, at least not not too soon. But, you know, and it’s funny that it seems to be Diaz who’s reaching out and he’s the one that tried to cover it up last year. So I don’t I don’t know how much I really believe that that is meant well.

Those who’ve read the report today might be surprised to hear about the two dozen or so other former students who’ve also experienced abuse there as well during their time. What do you make of that?

It’s an open secret that people could basically do anything you wanted to a student and have no fear of retribution, because you could just threaten to throw the student out there because it’s not a ‘state’ school. It wasn’t even illegal for them not to tell law enforcement (about my abuse) in 1986. I I think that changed a decade later. They did nothing because they could do nothing. That’s how a lot of these full scholarship schools work. It took me kicking and screaming to get them to actually admit wrongdoing.

Is it possible to feel a sense of closure after this report?

It’s kind of strange. I feel like it’s almost like a Pyrrhic victory. Yes, I guess I won, but it sure took a lot of life and a lot of re-living trauma. So I wouldn’t necessarily call it the triumph for myself, but hopefully it will be for for future students in all walks of life. And children especially.

After going public with her story last year, London-born violinist Lara St. John has been vindicated by an independent report that confirms her allegations she was sexually assaulted and raped by her instructor when she was a teen studying at the Curtis Music Institute in Philadelphia. 8:45