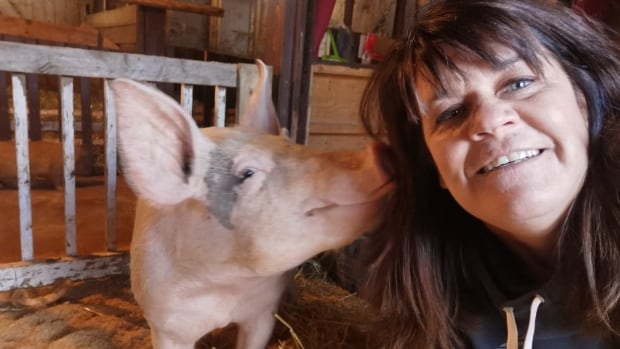 She’s been given a new lease on life at the farm in Brookfield, P.E.I., where owner Jana Hemphill teaches riding lessons and horsemanship, and also runs an animal rescue with 20 farm animals including goats, chickens, rabbits, horses, llamas, sheep — and now, a pig.

“I have a really hard time saying no to an animal in need,” says Hemphill.

Fern was found on a road in the Belfast area this summer by Logan Graham, who was on his way to work at Belfast Mini Mills. They concluded she had fallen off a truck onto the road.

He and another man pulled over and managed to lift the young pig onto the man’s truck. They then took her to the mill operation, which includes a farm component where Fern was placed temporarily.

When Graham told his girlfriend about finding Fern, she jumped at the chance to take in the pig.

“We’re a big lover when it comes to animals, and she was just so beat up and everything, he just couldn’t leave her there,” said Brittany Hazel.

Fern had scrapes and bruises but no broken bones, Hazel said. She took Fern to her mother’s small farm, where Fern lived contentedly for the rest of the summer and fall with some goats, on the understanding that Hazel would find a sanctuary that would eventually take in the pig.

“She was just so sweet and the poor thing was already through so much,” Hazel said. “We were lucky too, to find her.”

Hazel said she didn’t know much about pigs and never pictured owning one. Having Fern has been an “eye-opener,” she said.

“She was playful, she just had such a personality, like — too smart for her own good. It was different, but it was just a really good experience.”

As she searched for a farm or organization that would take Fern, Hazel heard about Hemphill’s shelter and contacted her. Storybook Stables agreed to take Fern and give her a permanent home.

Fern is Storybook Stables’ first commercial pig — although they have taken in three potbellied pigs, which Hemphill said have completely different personalities.

The potbellied pigs sleep 22 hours a day, but Fern acts more like a dog, seeking out attention and looking to play. She also likes to tip over her water tub, Hemphill said.

“Pigs are actually the smartest of all domestic animals,” she noted.

Fern is just settling into Storybook Stables, but Hemphill said they already know she is active and vocal and loves treats — especially anything sweet.

Because she will potentially weigh as much as 270 kilograms (600 pounds) Fern needs lots of room to be active, as well as the stimulation and companionship pigs need, Hemphill said.

Staff at the barn have been asked to say hello and give Fern a pat whenever they go by her stall, a converted classroom in the barn. She will learn her name, Hemphill said, and so should come when she is called, making her easier to handle when she gets larger.

Fern could live as long as 15 years, Hemphill said.

“It’s a journey, that’s no question, and it’s a commitment. And that’s sometimes why we get some of our animals,” she said. “People just don’t realize how long a potbellied pig lives, or a goat, and maybe their life changes and they just can’t care for them that long.”

Why does Hemphill want to take over that responsibility?

“I’ve always taken in strays,” she said, adding that Fern is special because she is a commercial hog. “She needs space to move and root and a large enough pen and she needs to be warm enough in the winter.

“I kind of feel like we’re kind of uniquely positioned,” to look after her properly, she said.

“I figured, well, one more animal!” she said with a laugh.

‘Going to be spoiled rotten’

The farm also relies on volunteers for its successful operation.

But the relationship is not one-sided — Hemphill said in return for food and lodging for life, the animals have a job to do.

Hemphill has made a commitment that Fern will never go to slaughter.

“The animals that live here, live here forever,” she said.

“We couldn’t have found a better spot for her,” Hazel said. “She’s going to be spoiled rotten. She’s a lucky pig.”