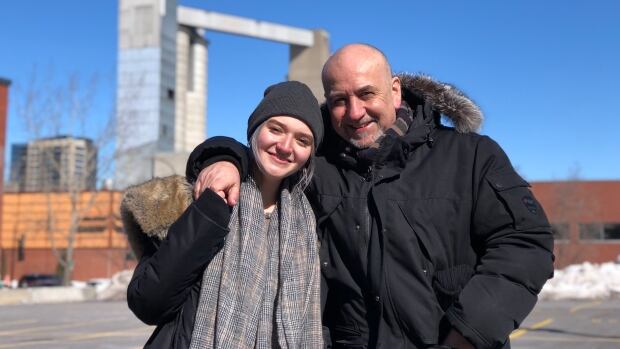 Eleven days after Quebec reported its first case of the novel coronavirus, Pablo Gray, 54, was being raced in an ambulance to Notre-Dame Hospital, where staff decided to test him on the off-chance that’s what he had.

“Nobody wore masks at the time,” Gray said.

When the test came back positive, he was then whisked to the Jewish General Hospital, the first designated COVID-19 treatment centre in the province.

Gray was case number seven in Quebec and among the first patients to land in the intensive care unit. He had started feeling sick after returning from a trip to the Dominican Republic with his two daughters.

Doctors at the time were consulting with colleagues in China to try to figure out best practices. Gray was put on a ventilator and was in a coma for two weeks.

“You think your dad is going in for a really bad cold and then you walk into a room and you get told that you need to get ready to say goodbye,” says Gray’s 19-year-old daughter Maïté, who is the only person in her family who did not catch COVID-19.

Her mother and brother became sick shortly after Gray’s positive test, and her older sister caught it in January 2021.

Almost a year has passed since the Grays returned from that trip to the Dominican Republic and they can now reflect on their experience with the virus.

Pablo Gray still has some residual symptoms, including feeling dizzy and winded when he gets up after sitting for a while, and a weird blocking and unblocking in his sinuses.

But he says one of the hardest parts of his journey was coming back home.

After nearly a month in the hospital — and vivid hallucinations caused by the heavy medications while he was in a coma — Gray says figuring out what normal life was again was overwhelming.

“The biggest thing is how lost you feel when you go back to reality.… I couldn’t remember the names of my kids,” Gray says. “It’s kind of like going to war.”

Gray is now part of a Université de Montréal study examining the lives of hospitalized COVID-19 patients once they return home. The study also connects recovered patients with more recent ones.

Gray says he and his wife, Marie-Claude St-Gelais, should be making their first calls soon. He says he wants to help those patients understand that what they’re going through is normal, and that it will pass.

His daughter Maïté saw it all from the perspective of a loved one and caregiver. When her mother and brother were sick in their condo near the Lachine canal, she would don a mask to bring them soup and anything else they needed.

“It was like a clinic at home. It was tough,” she said, because in the meantime, the family was getting grim news about Pablo.

“We’d get these text message about his oxygen dropping to 30 per cent,” Maïté said. “I would just text him all the time, like, ‘Please, wake up.’ It was just a lot of crying and you can’t even go and hug your mom because she has COVID.”

Doctors eventually tried a procedure called proning — flipping Gray onto his stomach to help his respiration — and reduced his sedation to help him come out of the coma in the hopes of him breathing on his own.

“He was a stranger at first,” Maïté said. “It was a long time until it felt like home again but he’s back now.”

The family says they’ve become closer through it all, and Gray even says his outlook on life has changed.

At the end of his interview with CBC, Gray lifted his fist up in the air and said, “One year ago!”