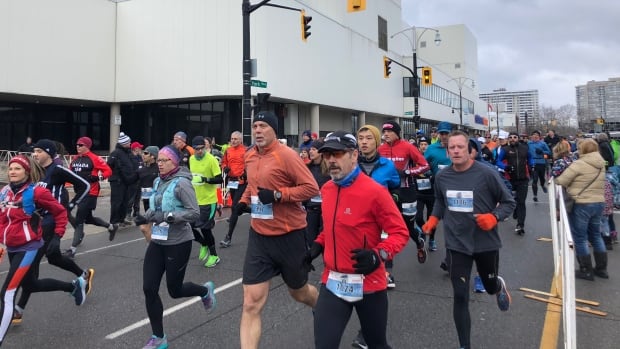 The 126th edition of Hamilton’s Around the Bay Road Race has been cancelled.

Around the Bay, North America’s oldest, long-distance road race, was rescheduled to November 22. It usually takes place in March or April. But organizers say that due to the pandemic the race won’t take place at all in 2020.

“Due to the ongoing nature of the COVID-19 pandemic and the provincial safety measures in place limiting outdoor gatherings, we are unable to host the Around the Bay Road Race in 2020,” said an update from organizers.

The cancellation came on the same day that Ontario reported 478 new confirmed cases — the most on any day since May 2nd.

Race director Anna Lewis said that if the race happened, it would have meant society was headed in the right direction in terms of tackling COVID-19. Cancelling it is hard, she said, but it’s important to keep working together.

“We hope that with some of these events being cancelled, it lets people know that we got to tighten our belts here,” she said.

Last year’s race clocked in with around 10,000 runners between the 30 km, relay race, and 5 km course, with some of them attending from around the world. That doesn’t even include those coming out to watch in support of their friends and family.

Lewis said they hope to get to those numbers again one day. But for now, they had to let people know the race was cancelled so that those in training had as much notice as possible.

Organizers say they are going to take the time to prepare and work on ways they can safely host the 30-kilometre race in 2021.

There will be no refunds — since the race was two weeks away from its originally scheduled date in March (when it was first postponed), and race expenses had been paid, organizers said.

Anyone who registered for the 2020 race can either:

Lewis says she knows people haven’t stopped being active. She encourages anyone who still wants to commit to running on their own to send along some photos, and the race will share them on their social media channels.

Lewis says they are hoping to host again in March with a special “return to the Bay” race.

Until then, she hopes people keep running, stay active and follow the guidelines set out by public health officials.

“We all want to get back to the activities that we love and enjoy, and to do that we all need to row in the same direction,” she said.