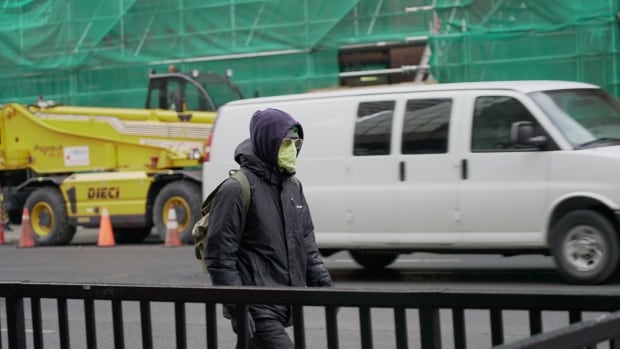 Hamilton’s active cases and weekly cases per 100,000 people have climbed in the past month, showing the city’s pandemic situation is almost as bad as it was at the start of February.

After infections began to fall from January into mid-February, some of the city’s COVID-19 data could have allowed for Hamilton to loosen restrictions and drop into the province’s Orange-Restrict zone.

The city stayed in red over fears variants of concern would spread.

While that’s still far below the numbers in January, the figures are almost back to where they were four weeks ago on Feb. 7, when the city had 527 active cases and 65 weekly cases per 100,000 people.

There are also four confirmed variant cases in Hamilton (all the B117 variant first seen in the U.K.). Hamilton Public Health Services (HPHS) is also waiting to confirm 106 variant cases that have screened positive.

The statistics align with warnings from public health to remain cautious.

Dr. Dominik Mertz, HHS medical director of infection prevention control, has also said in past weeks a third wave is inevitable, a lockdown could come by the end of March, and local COVID-19 cases may jump within the next two weeks.

Two more deaths were reported related to the novel coronavirus that causes COVID-19, including a person in their 70s.

There are 27 outbreaks in the city, two of which are new.

HPHS reported a new outbreak at Red Hill Toyota at 2333 Barton St. E., where three workers have tested positive. Orchard Park Secondary School also has a student and staff member with the virus.

The outbreak at the Salvation Army on York Boulevard grew by one, to 57 cases since the outbreak was declared on Feb. 10.

The Hamilton General Hospital Unit 5 West outbreak grew to 13 cases, with three more infected patients.  The outbreak at the Juravinski Hospital in Unit M2a was declared over. It infected eight people and was linked to two deaths.

114 new cases over the weekend

HPHS is reporting 114 new cases of COVID-19 over the weekend, 79 of which came on Sunday.

The city’s reproduction number is 1.03 (which means, on average, a person with COVID-19 will infect one other person).

Forty-seven people are in hospital with the virus.

Since March 2020, a total of 10,801 people have been infected (confirmed and probable cases) and 287 people have died after contracting COVID-19.

The total number of resolved cases stands at 9,909.

Status of vaccine distribution in Hamilton

As of the end of Thursday, public health says it has administered 41,360 doses of vaccine.

That includes 11,953 at the mobile clinic, 28,212 doses the Hamilton Health Sciences fixed clinic and 1,195 at the St. Joseph’s Healthcare site.

The county of Brant has 38 active cases according to data online.

There are two people hospitalized with COVID-19.

A total of 1,470 cases have been marked as resolved.

There have been 10,258 doses of the vaccine administered.

There have been 1,459 cases throughout the pandemic. Of those, 1,381 are labelled as recovered.

The local public health unit has linked the virus to 39 deaths.

There have been 8,474 doses of the vaccine administered.

The data shows 278 of those cases are active.

Three of the new cases were in Burlington, which has seen 2,466 cases of COVID-19 since the start of the pandemic. There are 42 active cases in the city.

A total of 198 people across the region have died after being infected with the virus, 49 of them in Burlington.

The region is reporting 19 confirmed variants of concern, two of which are in Burlington.

Niagara is reporting 23 new cases of COVID-19. The region has seen 8,744 cases over the course of the pandemic, including 199 that are active.

A total of 369 deaths have been linked to the virus over the course of the pandemic.

Meanwhile, 8,176 cases are marked as resolved.

There have been 11,727 doses of the vaccine administered in Niagara.

As of Friday, Six Nations of the Grand River had 114 active COVID-19 cases, according to Ohsweken Public Health.

It says there are four people in hospital. There have been 383 cases reported there over the course of the pandemic and four deaths.