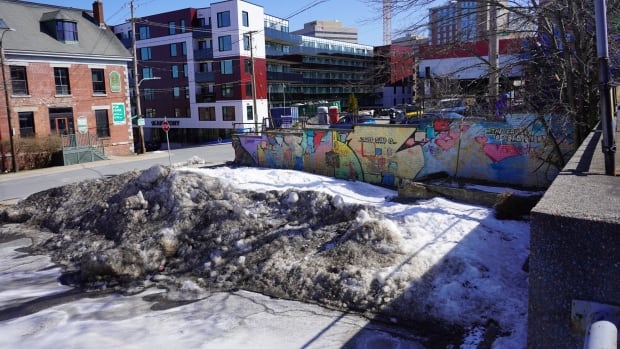 A large parking lot that’s become a canvas for graffiti in Halifax’s North End is being converted into a pair of low-rise buildings that will provide 57 affordable apartment units.

But it will take two years or longer before people can move in, according to the housing co-op that acquired the land from the federal government through a national housing initiative.

The project will be constructed in an underutilized parking lot on Maitland Street near Portland Place, and it’s expected that ground breaking will begin in early 2022 with occupancy about 12 to 18 months later, said Karen Brodeur, president of Compass Nova Scotia Co-operative Homes. She participated in a virtual news conference with Halifax MP Andy Fillmore on Thursday.

Dubbed the North-End Neighbourhood Development, the property is located behind a bakery, a restaurant and a pub on Gottingen Street, and across the street from townhouses. The project will build two six-storey apartment buildings with one-, two- and three-bedroom units.

“This will mean that the development is accessible to a huge range of household types, something that we desperately need in the HRM,” said Brodeur.

The federal government is providing Compass with $1.5 million in funding through the National Housing Strategy Federal Lands Initiative to purchase the property, while the Nova Scotia government is committing $3 million toward the development. The city also provided rebates on some fees to help move the project forward.

Fillmore praised the project for turning the usually empty parking lot that’s “kind of a blight” in the neighbourhood into homes.

Jim Graham, executive director of the Affordable Housing Association of Nova Scotia, welcomed the announcement, but said it’s not a silver bullet to fix the city’s affordable housing crunch.

“Every little bit helps, it’s just a shame that things take as long as they do,” he said, citing the challenges of navigating federal, provincial and municipal agencies to make affordable housing proposals a reality.

He added the 57 units will barely make a dent in the demand for affordable housing. Graham said some European cities have achieved a balanced housing market in which 12 to 15 per cent or more of rentals are non-profit compared to market-priced units. In Halifax, non-profit rentals are running at about two per cent of the overall rental housing stock, he said.

He said the city’s affordable housing supply is low because successive provincial governments haven’t built a public housing project since the 90s.

This project is being developed under a housing co-operative model, in which residents are members of the co-op and vote on decisions.

Brodeur said Compass wishes to draw upon the co-operative’s values of “sustainability, inclusion and collaboration” from the project’s construction right through to occupancy.

She said individual housing charges have not been determined, but Compass is “committed to maintaining average rents at 75 per cent of the median market rent for the area and time.”

Under its lands initiative, Ottawa will spend $200 million over 10 years to offload surplus federal properties at discounted or no-cost rates to encourage development of affordable, sustainable, accessible and socially inclusive housing.