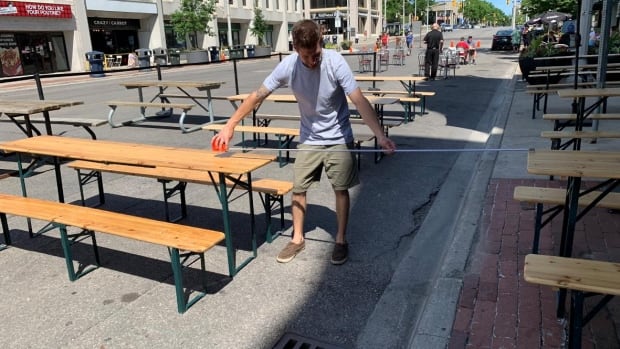 As London dawdles on closing down the Dundas flex street — a street which was designed to be closed to traffic occasionally — other cities are embracing a provincial rule that allows patios to expand in an effort to help businesses recover after a long pandemic-related shutdown.

This weekend, Guelph closed off some of its downtown streets and created a ‘dining district,’ moving in picnic tables and allowing patios to spill out onto roadways. Other cities have also instituted similar plans.

But London’s council has not, worried about parking and loading zones and the impact on car traffic.

This morning, Rebecca Zandbergen spoke to Guelph mayor Cam Guthrie about that city’s efforts to help businesses recover from the loss of customers during the COVID-19 shutdown.

Q: What exactly is Guelph doing?

A: Oh boy. Do you have an hour? We are doing great stuff, especially when it comes to this spilling out of patios, onto not only parking spaces but also onto closed streets, too.

We’re calling them dining districts. We really moved fast on this. It was only a week and a half or so ago that council unanimously approved the desire to have this happen in our downtown core. Our downtown Guelph business association moved fast as well to collaborate with the businesses.

We had our first Saturday and Sunday closing of some streets downtown, the city provided picnic tables, helped with the barricades, and everyone pulled together and it went off really really well.

Q: You’re doing this as a pilot on the weekends. How long will you do this?

A: We wish to do it all through the summer. Hopefully it goes at least until September. Originally, we wanted to have our patio policy to go through until the end of October but that’s only patios that would be allowed to go out onto the sidewalks. This one is about allowing patios to spill out onto the parking spaces and also, with the dining districts, the closing of streets.

We hope that it continues at least through into September, October. That would be a good a good way of getting feedback about how the system works. That way when a new report comes to council in the spring next year about how this project went, it will give us the information we need to make decisions, to look at maybe having it permanent moving forward.

Q: Why did you want to do this?

A: I announced that in my state of the city speech in February this year, pre-COVID, that I actually wanted to move our city toward  being more centered around people and not around cars, and to really transform our downtown core into an experience and an area that people would really like to attend to help with tourism.

There’s a lot of data out there that speaks to how businesses actually thrive in this type of an atmosphere. It’s just takes a lot of guts to actually do it. When COVID-19 hit and the businesses were going be hit so hard, I really felt that this was a great opportunity to pilot what I was trying to sell to the city already.

Everyone has really embraced it. It helps businesses make more money because it gives them more capacity while they’re adhering to social distancing, but it also helps bring back more people to work. So many of the businesses I spoke to, because of the extra capacity that they’re able to spill out onto the parking spots and out onto the street, they were able to hire two or three people more.

It’s been really good for a lot of reasons, not just COVID-19 related, but obviously that did help us spur on this pilot project.

Q: I understand the province has given street patios the thumbs up to allow them to spill onto the roadway?

A: Yes, last Thursday night (the province) did what’s called an emergency order across the entire province to get any kind of hurdles, of zoning and bylaws, out of the way so that cities across the province can embrace this type of idea. So, even though my motion to council came a week and a half earlier than that, we were really appreciative of getting those hurdles out of the way.

Now, really, there’s no excuse not to embrace this.

Q: Have you heard from motorists who who aren’t happy about this?

A: No, not really. Everyone got the heads-up that that the area was going to be closed. I saw a few people having to do a U-turn. I did hear from a few businesses that didn’t like it, and that’s fair. With a pilot project, you’re going to get some feedback or some that don’t like it, but that’s okay. We tweak as we go. It was just two days.

We dipped our toe in the water and we’re giving it a go, and we’re going to make some changes as we move forward for this weekend and the following weekends. And it’s going to be great. I personally am still laser-focused on making this try to be a permanent thing. It’s great for tourism, great for business, great for people.

It makes for a healthier and safer community and I really believe that businesses will thrive in this type of an atmosphere.

Q: You’ve seen London’s new flex street. Do you think we could do it here?

A: Absolutely. Just give it a go.

Especially with the province giving the emergency order last Thursday. There’s some naysayers and I totally get that, but you’ve got to plow through that a little bit. Just go and just give it a try. Say, ‘You know what, for the rest of July and August, we’re going to give this a go.’ These businesses, they need help right now. They’ve been closed for months. They need the capacity. They need to still adhere to social distancing and public health guidelines, but you’ve got to give them a little bit of help right now. Every city should really try to embrace anything that they can do to help these businesses come back. You never know, it might be something that you can keep permanently in London.