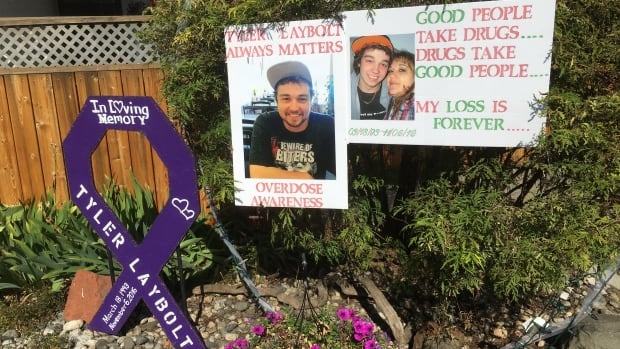 Angie Kirton lost her nephew to fentanyl overdose four years ago. Instead of hiding her grief, the Kamloops, B.C., resident decided to put up several displays in her front yard and tie purple ribbons on her bushes, in order to open up a conversation with neighbours about drug addiction.

According to the latest report by the BC Coroners Service, Interior Health records the second-lowest number of drug toxicity deaths among the five B.C. regional health authorities. But Kamloops has the fifth-highest number of cases among the province’s major communities this year. The southern Interior municipality was ranked the same in 2016.

Construction worker Tyler Laybolt was found dead of overdose in a Kamloops hotel on Nov. 6, 2016. Kirton still remembers the day she learned about the loss of her 23-year-old nephew, the only child of her sister.

Kirton was having dinner with her extended family in Alberta.

“My sister’s phone rang. And my sister screamed and she handed the phone to me and she fell.”

The whole family drove back to Kamloops that night to see the young man’s body in the morgue.

Laybolt was a rapper after work hours and signed a record deal just a week before his death. He is survived by his now eight-year-old son Jacob.

“He was an amazing dad, and he’s an amazing nephew and cousin and son,” says Kirton. “He would do anything for anybody. He was so funny, so smart, so talented.”

Thursday evening, Kirton and her extended family joined other people who lost their loved ones to drug overdose in downtown Kamloops, tying purple ribbons on light posts and other public facilities along the bustling Victoria Street as part of the Purple Ribbon Campaign.

Kirton envisions this campaign as an opportunity for the whole community to talk about drug addiction issues. She wants community members to understand that drug users who died of overdose are not bad people.

By putting up the “good people take drugs” display on the lawn of her house in Kamloops’ Westsyde neighbourhood, Kirton also wants to tell her neigbours that she’s willing to talk to about drug toxicity.

Last week, her display caught the attention of an older woman who was walking her dog, opening up a long overdue dialogue.

“She said: ‘I have a brother who died, and I’ve never been able to tell anybody why he died because of the shame,’ ” said Kirton.

Kirton will keep her display in the front yard until Nov. 7.