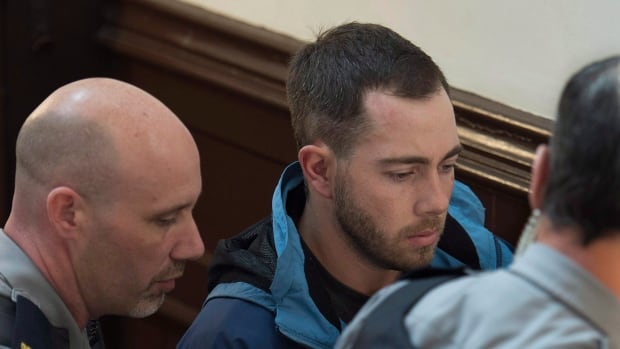 A Nova Scotia man accused of murder and awaiting trial in 2017 left a voice message on a Halifax Regional Police answering service detailing a trip home to visit his mother, the province’s police review board heard Monday.

The February 2017 message was played at the hearing into complaints over Christopher Garnier’s arrest for breaching conditions of his bail.

Garnier’s message disclosed a forthcoming visit to his “mother’s house in Millville” for the weekend of Feb. 17-19, 2017. It was left on an answering service for people released on court-imposed conditions.

The department later sought to arrest Garnier, who was charged at the time with second-degree murder in the death of Catherine Campbell, an off-duty police officer from Truro.

He was found guilty in December 2017.

Const. Mike Stevens of the Halifax Regional Police said he did not check the messaging service before or after Garnier’s arrest, as that was the responsibility of other officers in his department.

Garnier’s message, presented to him by the other officers, “might have been lost in translation,” Stevens said.

He couldn’t provide his own notes from Garnier’s arrest that February because he said they are missing.

Board chair Jean McKenna pointed out the Sydney hearing is not meant to find fault within the Halifax department, but is instead meant to examine the actions of four members of the Cape Breton Regional Police.

Garnier’s father, Vincent Garnier, filed a complaint against the Cape Breton department accusing the force of unlawfully arresting his son, taking photographs on private property without the knowledge or consent of the homeowner, and inviting themselves into the home where his son was staying.

A complaint was also filed against Halifax police, but the matter was not referred to the review board.

Christopher Garnier’s whereabouts came into question after police conducted a compliance check in the early morning hours of Feb. 18, 2017.

A Cape Breton officer knocked on two doors at Garnier’s mother’s home, but no one answered.

Charges were pursued against Garnier after he told police he hadn’t heard a knock, said Const. Stevens.

Had always complied with checks

He said prior to the incident, Garnier always complied with checks at his Bedford residence.

A Supreme Court judge later ruled that Garnier did not intentionally breach his conditions, as he was likely asleep.

Members of the three-member review board panel will consider written arguments in the case. It is unknown when their decision or findings will be released.

A lawyer for the Cape Breton Regional Police said Monday that he didn’t see any evidence of misconduct.