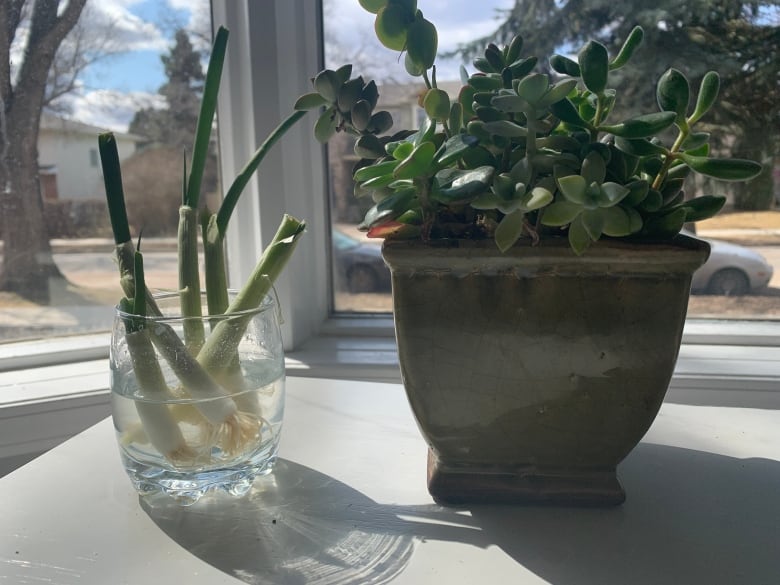 Thinking of picking up gardening during the COVID-19 pandemic, but don’t want to make a trip to the greenhouse?

With a little water and kitchen scraps, you can regrow many of your favourite vegetables at home.

Horticulturist and former greenhouse owner Jim Hole explained how to do it on CBC’s Radio Active on Friday.

This interview has been edited for length and clarity.

Q: What are the easiest vegetables to regrow?

A: Green onions are pretty easy to regrow. You can also do bulb onions, of course, but there’s lettuce, like romaine lettuce, beets, carrots, parsnips, potatoes, and even to a certain extent, cabbage. I think we kind of forget that when we buy many of these plants in the grocery store, they’re still alive. They’re not dead! They’ve been harvested from a field or from maybe a greenhouse and, given the right conditions, they can start to grow again.

Q: Is there anything that we can’t grow this way?

A: String beans and some peas. They contain seeds but they’re not going to reproduce. Tomatoes: the same idea. You can collect the seed and grow it. The key thing is the growing points on the plant — and what I mean by that is, inside the tissue of many of these common vegetables are growing points, or little tiny cells that are ready to send out shoots and leaves.

A good example is your lawn: What happens to your lawn after you cut it? It regrows because the growing point is down below, just above the soil. The same kind of principle applies to many of these vegetables you can grow from bits. As long as you have those growing points, you can generate a new plant.

Q: It’s still too early to get in the garden, so how do we best do this inside our homes?

A: What’s kind of exciting is to put these pieces with growing points into some water. Stick them into a container with regular tap water. You don’t want to just drop the entire bit into the water. You want to have the base that can draw the water up through the vascular tissue and to the bud on the plant and then quite quickly, you’re going to see some little sprouts and shoots coming up and then leaves developing.

They grow more quickly the warmer the temperature, but it really doesn’t take that long before you see some development and then you could transfer it into some potting soil later on. The plants are going to be more successful there. But again, you can start them in the water. It’s kind of cool just to watch these things popping out.

Q: How much light do these need?

A: Let’s face it, the plants need light. As the leafy tissue develops, you don’t want to stick it in blazing hot sunlight because the plants are going to burn. You do want to get it into bright conditions. If you don’t do that, you can still get some development, but you get this long, stretchy and weak tissue.

Q: How can you regrow a carrot?

A: Simple. Look at the top or the crown of the plant. The crown is a transition between that tapered root and the foliage. The crown contains the growing points that I talked about. If you simply cut the maybe a half a centimetre off the top of the carrot and put that into the water, that water will move up to the vascular tissue of the little crown and a little bit of that tap root system and it will start to hydrate the growing point. Then you’ll start to see the development of the foliage.

Now keep in mind, you’re not going to get a tapered root from this, but you are going to develop the foliage, which actually is really nice to use in a variety of dishes.

The same thing applies to other plants. You could do the same using similar technique with, say, celery, or some other plants, even the crown of beets.

If you look at something like celery, the growing points are just above where that cut end is in the tissue. You’ll see that growth being generated nicely.

Q: What about potatoes?

A: If you want to have a little bit of fun, cut out a little chunk of the tissue, with the eye, and start it the same way.

One caution is that if you do get the potatoes from a store, sometimes they’re treated with a sprout inhibitor to prevent the sprouts from coming out. If you store potatoes and you are baking the potatoes, just try cutting an eye and starting a potato that way.

Keep in mind, if you ever do have a potato down in your basement that you’ve stored over the winter and it’s got those little white shoots coming up, you don’t want to eat those. Those are poisonous. Don’t do that!

Q: What about herbs?

A: Well now you’re kind of into a different realm. You do have the growing points on the plant; they’re on the stem tissue. Really what you’re doing is taking a cutting. This is something that growers in greenhouses or people at home do. You take a cutting off the plant. Stick it into some water and you’ll see roots generating at the base of that cutting. Then you transplant it to a potting mixture and boom — you’ve got a plant starting out.

Just a word of caution: typically with the herbs, you want to have more of a tender cutting. If it’s really woody, it just takes a long time to develop and sometimes you have failure with that. When the tissue’s a bit softer, typically it roots much better.

With all of this stuff, you don’t have to have 100 per cent success. If you get half of them making it, great! If you put 20 in and you get five, great! You’ve got five new plants you can get going again.