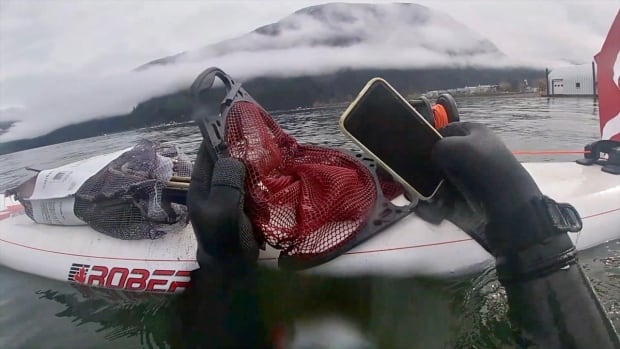 Fatemeh Ghodsi was skeptical at first when she got a text from someone saying they found her phone nearly six months after she lost it in Harrison Lake.

Ghodsi, who lives in Vancouver, was confused and thought one of her friends might be playing a prank on her. But she was soon convinced and made the trip to Chilliwack to collect the phone, which amazingly still works.

Clayton Helkenberg and his wife Heather found the lost iPhone 11 during a sweep of the lake bottom under the water park at Harrison Lake — part of a hobby that includes the odd treasure find, but mostly just lots of garbage clean up.

Ghodsi dropped the phone in the water in early September, during a ride on the bumper boats — photos recovered from the phone show her still smiling moments before the mishap.

“I was in a situation where I kind of lost balance and dropped it in the water,” she said, adding that the water park staff convinced her it would be impossible to find the phone in the deep water.

“Distressed and in tears, we went back to Vancouver just kind of hopeless,” said Ghodsi.

She soon bought a new phone, and came to terms with the lost photos, contacts, and other personal information that hadn’t been backed up.

Helkenberg has been snorkeling, swimming and diving for years, but at the start of 2020 — with extra time on his hands after being laid off — he started putting more effort into searching for lost items in the water, as well as doing trash cleanup missions.

Sometime he goes on his diving missions with friends and his wife. He even started a YouTube channel to document his finds.

His underwater work has even attracted some media attention, including a report of 359 kilograms of trash he and friends pulled from Cultus Lake earlier this year.

This week, he was at Harrison Lake — the water is much shallower now than it was in the summer, and according to Helkenberg, it’s quite clear. He found a severely damaged flip phone, but Heather Helkenberg noticed Ghodsi’s iPhone.

‘It just turned right on’

Clayton Helkenberg said he usually puts phones in a container of silica to dry them out, but he’s had good luck with iPhone 11s.

“I took it home, cleaned the dirt off of it and it just turned right on, so it was pretty amazing,” he said.

He pulled out the SIM card, put it in another phone to figure out the phone number and got in touch with Ghodsi.

“I was in complete shock, initially to start with. It was kind of like a zombie phone coming back to me, because I’d totally made peace with it being gone,” she said.

Ghodsi said the microphone is broken and the speaker sounds weird, but everything else is in perfect shape; the battery health is still at 96 per cent.

She’s thankful for the phone’s recovery and inspired that Helkenberg makes the effort to reunite people with lost valuables, asking nothing in return. But the experience has left Ghodsi even more impressed by his trash cleanup work, saying it’s a reminder to keep our water clean.

“It gives me so much hope for the good that’s out there,” she said.

As for the next time she takes a ride on the bumper boats? Ghodsi said she’ll either leave her phone and valuables on the shore or keep them securely stowed in a pocket.

Do you have more to add to this story? Email [email protected]