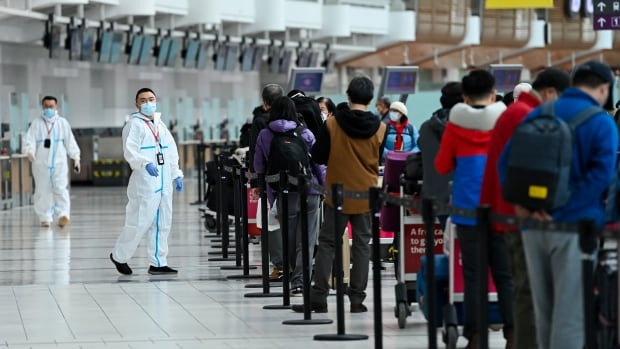 There is one new case of COVID-19 in Newfoundland and Labrador on Tuesday, just as the provincial government takes steps around anyone entering the province by requiring all travellers to fill out forms online prior to arrival.

The new case is a man in the Eastern Health region between 50 and 59 years old.

The case is travel-related, according to a Department of Health media release. The man is a resident of Newfoundland and Labrador who returned to the province from work in British Columbia.

The Department of Health is asking passengers who travelled on Air Canada flight 8996 from Halifax to St. John’s arriving Thursday, Nov. 19 to call 811 to arrange COVID-19 testing.

Even in the event of a negative test, public health is encouraging all passengers to continue monitoring themselves for symptoms for a full 14 days from the time of their arrival in the province.

There are also four new recoveries being reported on Tuesday. The province’s active caseload is now 33 and the total recoveries since March is 302.

As of Tuesday, all travellers to the province must fill out a form online in the 30 days prior to them entering Newfoundland and Labrador. According to the Department of Health, travellers will then receive a reference number they must show border officials when they arrive, either by air or sea.

The provincial government’s COVID-19 travel declaration form has been fleshed out to require more information and clarify the necessary consents from all those entering Newfoundland and Labrador. Rotational workers must give additional information about their worksite, and all travellers must declare that they understand such rules as mandatory mask-wearing in public places in the province.

Dr. Janice Fitzgerald, the provincial chief medical officer of health, said Monday none of updated information on the forms is a new requirement, but helps officials track people entering, and their associated data, more efficiently.

The only exception to the form is for travellers crossing at the Labrador West-Fermont border, who do not need to fill it out electronically ahead of time.

The next in-person briefing on the province’s pandemic response is scheduled for Wednesday.