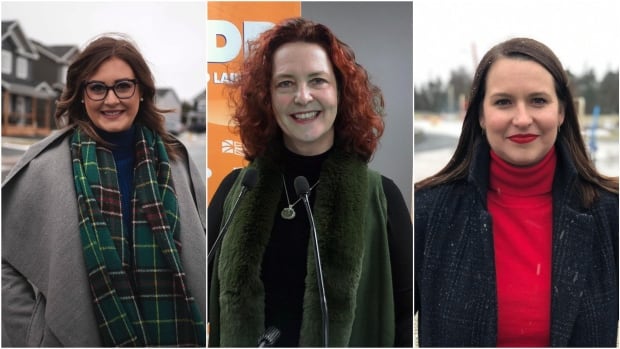 In preparing for her first election run, Kristina Ennis never expected what would be called into question during her first days of door knocking.

At least a couple of times a day, her age has been brought up at the door, Ennis, the Progressive Conservative candidate for St. John’s West, told CBC News.

“Comments around, even straight up asking, ‘How old are you? Are you old enough to be running in this election?'” said Ennis.

Ennis — who, for the record, is 30 — said she tries her best to brush off such remarks and focus on her skills, like a near-decade of experience in the oil and gas sector. But the comments on her appearance nag at her at night, especially so after talking to male counterparts to find none of them had similar experiences.

“I don’t think my age has anything to do with my credibility. And when I get questions like that, I feel as if my credibility and my skills and my qualifications are being called into question simply because I am a female in politics,” she said.

Ennis’s experience hasn’t been an aberration since Newfoundland and Labrador’s general election was called Friday evening. Female candidates have been sharing encounters of sexism and misogyny, from casual comments to online trolling, that aren’t limited to political newcomers.

“I’ve had some harassing behaviour against me. I’m seeing that on the campaign trail. In the third day. So it’s a bit of an interesting experience,” said Sarah Stoodley, the Liberal incumbent candidate in the midst of her second campaign for Mt. Scio’s seat.

Most of the comments come via email, Stoodley said, continuing a trolling trend she saw when she was an MHA.

One tactic? Don’t engage much with the senders, she said.

Still, the emails have prompted her team to ensure Stoodley never enters or leaves her campaign office unaccompanied, she said, with even some women on her team — unelected employees or volunteers — having been targets.

Annnnnd the Twitter abuse of a woman candidate has already started for me. It’s funny how even though I’ve researched, spoken about it, and done media specifically on this topic, it still hits hard.<br><br>Think before you Tweet folks. There’s a real person on the other side.

I’ve heard from female candidates, from within our party, and others, that the misogynist commentary is already flooding in.<br><br>They will attack your hair, your clothes, and your ethos.<br>They will call you a clown, and a fool.<br>Sisters, do not be deterred. Galvanize <a href=”https://twitter.com/hashtag/nlpoli?src=hash&amp;ref_src=twsrc%5Etfw”>#nlpoli</a> <a href=”https://twitter.com/hashtag/BeHer?src=hash&amp;ref_src=twsrc%5Etfw”>#BeHer</a>

Alison Coffin, running for the NDP in St. John’s East-Quidi Vidi in her third election, credits her campaign team for insulating her from the nastiest online snipes. But despite trying to abide by what should be the internet’s golden rule — don’t read the comments — sexism seeps through.

“I certainly have had lots and lots of comments about how I look, what my hair is like. And people don’t talk to you about your message — they say, ‘Well, oh, that outfit didn’t quite fit right,'” said Coffin, who is also the party’s leader.

Even for a seasoned politician, Coffin said, such jabs can be setbacks, and she knows it keeps others with political aspirations on the sidelines.

“That’s a real unfortunate barrier for a lot of women. A lot of people don’t appreciate that type of criticism, and it really is a deterrent to bring good, strong women candidates who are smart and have good ideas,” she said.

Despite their political differences Ennis, Coffin and Stoodley share an uncommon unity in this campaign in the face of discrimination. And they’re not the only ones.

“Females from all parties are coming together to support one another, and I really love that spirit of teamwork. I’m really big on teamwork as it is, and I think a collaborative approach to problem-solving is what’s best in most situations,” Ennis said.

There’s weight to that energy. The nomination deadline for candidates is Saturday, but so far, percentage-wise, there are more women running in the 2021 election than ever before at 33 per cent, or 37 out of the 112 candidates declared as of Wednesday.

Female candidates are contributing uplifting songs to a non-partisan playlist to help power them through any campaign trail problems — Ennis’s pick is Grown Woman by Beyoncé — and giving advice; Stoodley recommends brushing off negative comments, while Coffin said it helps to shut off social media.

To effect larger change, Ennis said education is key. She credits Equal Voice NL — the provincial chapter of the Canada-wide non-profit that promotes women in office — as raising the issue’s profile. On a personal level, a tool she’s used in the past has been to make people aware of unconscious bias, and she hopes this campaign incorporates that tactic.

“A lot of people don’t necessarily realize how their words hurt and impact another person. And I think the campaign happening right now, and the number of comments women are getting, I think it’s important that … that the awareness can get out there, that this is inappropriate, and this is why it’s inappropriate, so that people hopefully understand and this attitude stops,” she said.

It’s a big ask, and bigger than a month-long campaign, where addressing sexist comments takes time away from the issues and policies the politicians are trying to discuss.

Gender parity among all parties remains elusive, and prior to the election, only 22.5 per cent of MHAs were women. Coffin said sexism continues to dog and deter female candidates in part because it isn’t getting fully addressed within the larger political sphere.

“I certainly see that in the House of Assembly, that semblance of that old boys’ club is still there. It’s a lot of token words about women’s issues, but it doesn’t seem to be a real fulsome understanding,” she said.

Case in point: in October, Lisa Dempster, a Liberal cabinet minister at the time, was called “a schoolgirl” by Opposition MHA Barry Petten, who later apologized for those remarks.

For progress to be made, Coffin said, sexism needs to be called out wherever it’s seen.

“We need to address it directly and it needs to be embodied by all politicians,” she said.

For her part, Stoodley is working to embody change. Being visible, she said, is key, and her past months in politics show that commitment. She was sworn in as a cabinet minister in her third trimester in August, with her pregnancy bringing about Confederation Building changes from adding change tables in washrooms to permitting babies on the legislature’s floor.

In less high-profile work, Stoodley said she has tried to give political tours and, in pandemic times, Zoomed with schoolchildren to talk about what being an MHA is like.

“If they see themselves as that, hopefully they can aspire to be that,” Stoodley said.

Stoodley notes female candidates often are able to fundraise less than male counterparts — a CBC/Radio Canada investigation found an average gap between genders of about $5,000 in the last federal election — and she hopes there’s room for further, systemic electoral change.

“In terms of the system we’re working in, where we run and we’re candidates and we have parties, can we tweak the system to help encourage more women to run, so that we move closer to the 50/50 split that reflects the general population?” she said.