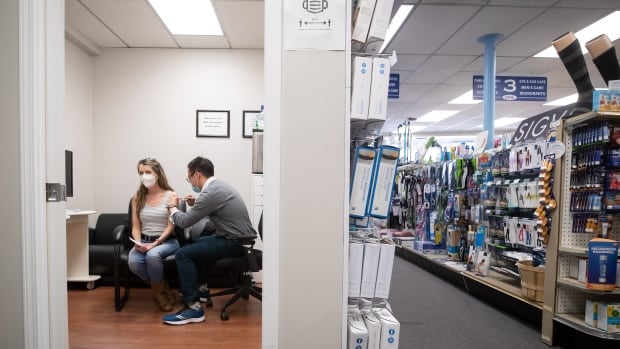 A McMaster University professor says the Hamilton pharmacies selected so farto offer AstraZeneca vaccines to people aged 55 and up fails the city’s poorest residents by forcing them to travel much farther for a shot.

After seeing online criticism about the pharmacy locations last week, Antonio Paez, a professor in the department of earth, environment and society, teamed up with Christopher D. Higgins, an assistant professor in University of Toronto Scarborough’s human geography department. The two analyzed the locations of 10 pharmacies, which are mostly on the Mountain or in suburban areas.

The analysis, submitted to Transport Findings, looked at the estimated travel time, one way, for people aged 55 to 69 (because 70-year-olds can get vaccinated elsewhere).

Paez said he entered the research with an open mind, thinking more people in that age group may live in the suburbs.

“After seeing the analysis … it did have these unequal impacts, even after considering many seniors live in suburbia,” he said in a phone interview on Wednesday.

The travel times showed people living in the lower city or in rural areas would have to spend up to 30 minutes to reach a pharmacy with COVID-19 vaccines.

Those in the suburbs usually wouldn’t need more than 10 minutes.

Expected travel time, unsurprisingly, tended to be higher in urban and rural Hamilton<br>9/ <a href=”https://t.co/Hdc2pTPV4m”>pic.twitter.com/Hdc2pTPV4m</a>

“It’s a one-way trip, so the figures you see there are probably twice that. That adds up to thousands of hours of travel time,” he said.

The analysis also shows a simple fix — with just three sites offering vaccines in the lower city, the disparities between high and low-income groups almost vanished. It still showed rural and urban residents may have to travel longer, but not quite as long as before.

“We just picked out three sites … it doesn’t seem difficult to achieve that,” Paez said.

“This is important when we would like to avoid unnecessary travel. If you could have three sites downtown, you’re saving thousands of hours of travel that would otherwise be essential, and they don’t have to be,” he said.

Flamborough—Glanbrook MPP Donna Skelly said the research is already outdated because people 60 and older can now get vaccines.

“There will be hiccups, and that was clearly one of them … it certainly wasn’t intentional but it’s been addressed,” she said on Thursday morning.

“This is a very fast moving virus … as things change, as we see more variants, as we get more doses, the age requirements are shifting and this research … thank you for the research, it could be looked at when they identify the hotspots for the next rollout that doesn’t even require an age limit.”

Skelly said after Hamilton politicians issued a joint statement about the lack of lower city pharmacies with vaccines, she and the city’s medical officer of health got the age limit lowered within an hour.

Skelly also previously said more pharmacies, 69 in total, will be getting vaccines.

She received her shot at a pharmacy on the Mountain Monday morning after booking it Friday.

“We’ve got to get people to get vaccinated. That’s a whole other issue,” she said. “When you hear about clinics where doctors are sitting waiting on people, and people saying, ‘We can’t get our shots,’ we’ve got to get the vaccine out.”