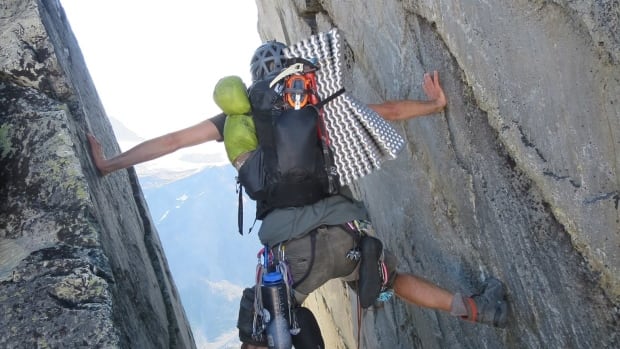 The father of a missing man who had been living secretly in Squamish before he was shot is offering a $10,000 reward to any tipster who can help solve his son’s homicide.

In Squamish, friends in the climbing community knew Hyman Greenbaum’s missing son as Jesse James, a politically progressive, vegan climber with no hint of the racist neo-Nazi past he’d left behind.

But RCMP identified him this week as Davis Wolfgang Hawke — a U.S. citizen with a history of online spamming and white supremacy.

Hawke grew up as Andrew Britt Greenbaum but would later change his name.

Two weeks ago, the elder Greenbaum learned from a Medfield, Mass, police officer who knocked on his door that a DNA match had confirmed his son’s identity.

“My first thought was maybe he faked it somehow but evidently not,” Greenbaum said in an interview from his home in Massachusetts.

“It was a big let-down,” said the 74-year-old whose wife died a year and a half ago. “In a way, I’m glad she never knew, because I know how much it would have upset her,” he said.

Before her death, Peggy Greenbaum often expressed public horror at her son’s racist rants and high-profile, if short, stint in his high school-college days as a neo-Nazi organizer. His attempts to organize an anti-government rally in 1999 in Washington, D.C. failed.

His mother blamed her son’s embrace of hate on the fact he was bullied for being a bit odd as a child. She publicly called him a coward for rejecting his family and his Jewishness — ousting him from the family home for a time.

His father offered no insight into why a chess prodigy who grew up in an affluent Boston suburb would turn to hate and reject his own parents. He said his son had his secrets, and at a certain point, never looked back.

“When Britt left and disappeared he left a book here. It was called How to Hide Your Assets and Disappear, said Greenbaum.

And disappear, he did.

The 38-year-old vanished 20 years ago — after he was sued by AOL in the U.S. for $12.8-million over the spam empire he created hawking loans, pornography, jewelry and prescription drugs.

Hawke would lure people with pornographic teases to send him money for penis enlargement pills, according to Brian McWilliams, author of the book Spam Kings who spent years tracking the young man.

When Hawke failed to show up to court  and AOL won the case, the company came looking for its money — hunting him for years with detectives.

Greenbaum, a semi-retired MIT employee who developed systems software, says despite the very personal rejection of him as a parent, he’s always hoped for his son’s return.

“For all these years, we’d held out hope. Now it’s gone,” said Greenbaum.

He last saw his son about a year after he disappeared. He showed up for a few days, saying he’d come from Belize.

“You never knew if he was telling you the truth or not,” said Greenbaum.

His son once denied that Greenbaum was his biological father, claiming his mother had an affair, which she denied.

Greenbaum said his son admitted he’d converted his money into gold that his friends told AOL he had buried.

“[AOL] threatened to dig up my yard and his grandparents yards,” said Greenbaum.

In 2006, he heard that his son had been spotted at a chess club in Colorado — but then — nothing.

He had no idea about his son’s life in Squamish.

“It’s hard to say what he could have accomplished had he set his mind to it.”