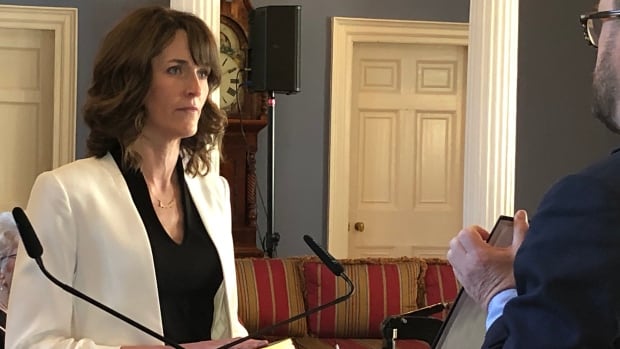 P.E.I.’s cabinet minister responsible for advancing the interests of Island women has been provided with a bigger, more detailed mandate from the premier.

That’s something the P.E.I. Advisory Council for the Status of Women is heralding as “good news for women” and “a great beginning” in terms of addressing issues of systemic inequality.

Natalie Jameson was sworn in as P.E.I.’s minister of environment, water and climate change back in February. At the time she was also designated minister responsible for the status of women, taking over those duties from Finance Minister Darlene Compton.

While Jameson was sworn in seven months ago her mandate letter from Premier Dennis King, outlining his priorities in terms of what Jameson is to achieve in her portfolio, was only released last week. The letter is dated Sept. 16.

And while her environmental mandate is almost word-for-word the same as that provided to former environment minister Brad Trivers, Jameson’s duties as minister for the status of women have been expanded significantly compared to what her predecessor was tasked with.

Compton’s three-page mandate letter included only a single bullet point dealing with her portfolio with the status of women, in which the premier asked her to “continue as a strong advocate for all women and girls, advancing equality and opportunity for women through government policies, programs and services and through consultation with stakeholders both internally and externally.”

By comparison, Jameson’s mandate letter includes a list of five detailed responsibilities, ranging from leading efforts to examine government policies and programs through a gender lens, to working with groups to end gender-based violence.

For years, women’s organizations have been “calling for recognition of the issues that impact women and looking for systemic change, which as we know has to come from government,” said Deborah Langston, chair of the P.E.I. Advisory Council for the Status of Women.

“I feel like this year, we have words in the mandate letter that call for action so we can have proactive steps being taken to actually address some of the inequities. So it’s good news.”

Langston said by comparison, the mandate given to the previous minister “doesn’t actually stipulate action — so maybe more maintaining the status quo.”

And the status quo, she said, “has to change.”

She said the pandemic “has been a real reality check for so many marginalized people, and especially women, in terms of where we’re lacking and where we’re falling behind.”

Sweta Daboo, executive director of the P.E.I. Coalition for Women in Government, pointed to a directive referencing multi-year commitments from government to provide core funding to four women’s advocacy groups, including her own. It’s the first time the groups have received core funding from government, rather than funding tied to specific projects.

She said a commitment of $20,000 per year “has made an absolutely huge impact” on the group, allowing it to “build the internal strength of the organization” and plan for the future knowing there is a stable base of funding.

She said laying out these specific commitments in a mandate letter “provides an additional level of accountability” along with “a recognition that there is a certain amount of work that needs to be done.”

Both Daboo and Langston noted that, while the premier has laid out a more detailed mandate for his status of women minister, most of the targets — things like improving economic opportunities for women, or increasing their representation in leadership positions — have yet to be achieved.

“It’s a fantastic start and we hope that it will continue,” Langston said.