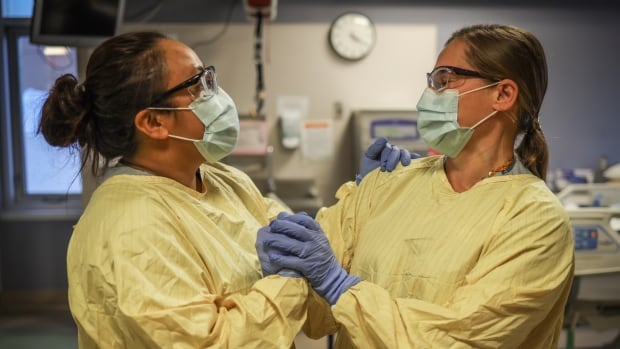 Click on the map below to zoom in or out on specific local geographic areas in Alberta and find out more about COVID-19 there:

What you need to know today in Alberta

On Monday, the province saw its highest number of new cases yet with 1,733. Over the past three days, the province has reported more than 5,000 new cases, with 1,731 on Saturday and another 1,608 on Sunday.

Here is the regional breakdown of active cases reported on Monday.

Alberta Health Services said plans are in the works to more than double the number of ICU spaces.

Alberta added 20 additional intensive-care beds in Edmonton over the past week and 10 more in Calgary.

Hospitals across the province are working to dedicate 2,200 beds for COVID patients, as they did last spring, Premier Jason Kenney said in the legislature Monday. Dr. David Zygun, medical director for the Edmonton zone, said there are plans to increase the province’s ICU bed capacity for adults from 173 to 425.

“Let us hope it is not necessary,” Kenney said. “And ultimately, that’s up to Albertans to respond positively to both the restrictions and guidelines articulated by the government last week.”

COVID’s presence in Alberta ICUs has more than tripled during the last month. On Oct. 30, 24 people were critically ill with an infection. Alberta hit a new record of 96 COVID-19 patients in ICUs on Monday.

According to information published by AHS there are more than 160 COVID-19 cases connected to active hospital outbreaks right now, and at least 20 deaths are linked to the outbreaks.

Since last Thursday outbreaks have been declared at health centres in Drumheller, Oyen and Devon, along with Chinook Regional hospital in Lethbridge.

In Calgary, outbreaks at three adult hospitals continue to grow. There are now 21 cases on four units at the Rockyview General. An outbreak has been declared on another unit at the Peter Lougheed hospital, bringing the total there to 18 cases on four units. There have been three deaths linked to that one. The latest Foothills hospital outbreaks are affecting two units. There are now 10 cases there and one person has died.

Alberta Health is now collecting data on the racial and ethnic background of people diagnosed with COVID-19 but says the data is not yet ready for public release because it’s not complete.

A snippet of the data was put out by the premier’s issues manager Monday, in defence of the premier’s comments about high caseloads in the South Asian community.

“Albertans of South & East Asian descent account for just under 20 per cent of COVID-19 cases, but represent only 11 per cent of the population,” Matt Wolf posted on Twitter.

The tweet was one of several Wolf posted in response to what he described as misplaced outrage from some of Premier Jason Kenney’s critics over Kenney’s recent comments about high caseloads in northeast Calgary, where many South Asian immigrant families live, among others.

The comments come as Calgary-Upper NE, one of 132 “local geographic areas” that the province uses in reporting COVID-19 cases, has struggled for many weeks with the most  cases of any LGA in the province.

The number of active COVID-19 cases there surpassed 1,000 last week, a number not seen anywhere else in the province at any time during the pandemic. As of Sunday, there were 1,194 cases. That’s double the numbers seen earlier in the month.

People who live and work in the northeast say there are many reasons that make their communities easy pickings for a virus that thrives on density and easy opportunities for transmission. Those opportunities vary from residents working public-facing, low-income jobs with no opportunity to work from home, to a culture of large, multi-generational households in densely populated neighbourhoods

Many said they thought the types of jobs worked by those living in the northeast could represent the number one factor behind the high COVID-19 numbers.

Hundreds marched through downtown Calgary on Saturday to protest against mandated masks and other public health measures intended to prevent the spread of COVID-19, the same day record highs in new cases and hospitalizations were reported in the province.

The protests, or “Walk for Freedom,” have been a weekly occurrence in the city and across the country for months, but Saturday was the first since the province’s 10-person limit on outdoor gatherings was announced.

Some signs at Saturday’s protest expressed misinformation, saying vaccines can alter DNA or that masks cause bacterial or fungal infections. Others expressed economic concerns, or anger at the federal or provincial government. Members of at least two far-right or white supremacist groups were also seen in attendance.

No tickets were handed out at Saturday’s protest, but police say they are considering a plan for strategic enforcement going forward.

Also despite the new provincial restrictions, large crowds of shoppers descended for Black Friday sales at Chinook Centre in Calgary — and police say a couple of instances quickly got out of control.

Multiple fights broke out and officers escorted a “whole bunch” of unruly patrons out of the facility. No charges were laid.

Cadillac Fairview, the mall’s owner, said in a memo to employees that the mall itself won’t be managing capacity restrictions, but that task will fall to each store. The mall also notified retailers that there were confirmed COVID cases at Nordstrom, Pandora, Hudson’s Bay, Nespresso and Mr. Pretzel, as well as one Cadillac Fairview employee.

Forest Lawn Library in Calgary is closing temporarily after an employee tested positive for COVID-19. The employee was at work on Saturday and had contact with the public.

What you need to know today in Canada:

The Liberal government is preparing to spend up to $100 billion to kick start the post-pandemic economy as it stares down a record-high deficit projection of more than $381 billion for this fiscal year.

In a long-awaited economic statement, tabled Monday, Finance Minister Chrystia Freeland said the government’s immediate priority is to do “whatever it takes” to help Canadians and businesses stay safe and solvent.

The short-term stimulus package is valued at $70 billion to $100 billion over roughly three years. The government says the stimulus spending — intended to build a greener, more inclusive, more innovative and competitive economy — will launch after a vaccine is distributed and life begins to return to normal.

A majority of Canadians could be inoculated against COVID-19 by September 2021 “if all goes according to plan,” Prime Minister Justin Trudeau said on Friday. Trudeau said it was important the vaccine reaches all Canadians “no matter where they live.”

Saskatchewan Premier Scott Moe said Monday it’s too early to say whether COVID-19 restrictions will be loosened in time to allow families to gather for the holidays. Moe said residents can expect to see high COVID-19 case numbers for the next few weeks, as officials wait to see if the latest public health measures have been effective.

The province reported 325 new infections on Monday and said there are 123 people in hospital, 23 of whom are receiving intensive care.

In Manitoba, health officials reported 343 new cases of COVID-19 on Monday and 11 additional deaths. The province, which has been dealing with a surge in cases, said 342 people were hospitalized with COVID-19, with 43 in intensive care units.

Ontario reported 1,746 new cases of COVID-19 on Monday and said hospitalizations had climbed to 618 — the highest hospitalization figures reported in the province’s second wave.

The province’s Health Department said there are 693 patients hospitalized with COVID-19, 28 more than the previous day. Ninety-four people were in intensive care, an increase of two.

Across the North, there were four new cases of COVID-19 reported in Nunavut on Monday, while one new case was reported in Yukon. A mask mandate for indoor public spaces goes into effect in Yukon on Tuesday.

There were no new cases reported in the Northwest Territories, which has seen 15 cases to date.

In British Columbia, the province announced the highest number of COVID-19 deaths for a three-day period as it recorded 46 fatalities over the weekend.

Provincial Health Officer Dr. Bonnie Henry addressed those who have lost loved ones in the pandemic, saying “we all feel your loss and mourn with you.”

“These people have faces, have names, have stories. This tragedy is all of our tragedy,” Henry said. “If you are thinking it may be OK to bend the rules, please remember this virus takes lives.”

As of Monday, a statement from Henry and Dix said there were 316 people with COVID-19 in hospital, including 75 in intensive care.

The head of a U.S. biotechnology company that is developing one of the most promising COVID-19 vaccine candidates says Canada is not far behind other countries when it comes to receiving doses of its vaccine, despite criticism of the government’s procurement plan from the Conservative opposition.

“Canada is not at the back of the line,” Noubar Afeyan, co-founder and chairman of Moderna, told CBC’s Chief Political Correspondent Rosemary Barton on Sunday.

Moderna Inc. said it would ask U.S. and European regulators Monday to allow emergency use of its COVID-19 vaccine as new study results confirm the shots offer strong protection — ramping up the race to begin limited vaccinations as the coronavirus rampage worsens.

With winter cold and influenza season approaching, Alberta Health Services will prioritize Albertans for testing who have symptoms, and those groups which are at higher risk of getting or spreading the virus.

General asymptomatic testing is currently unavailable for people with no known exposure to COVID-19.

Those who test positive will be asked to use the online COVID-19 contact tracing tool, so that their close contacts can be notified by text message.

The province says Albertans who have returned to Canada from other countries must self-isolate. Unless your situation is critical and requires a call to 911, Albertans are advised to call Health Link at 811 before visiting a physician, hospital or other health-care facility.

If you have symptoms, even mild, you are to self-isolate for at least 10 days from the onset of symptoms, until the symptoms have disappeared.

Online resources are available for advice on handling stressful situations and ways to talk with children.