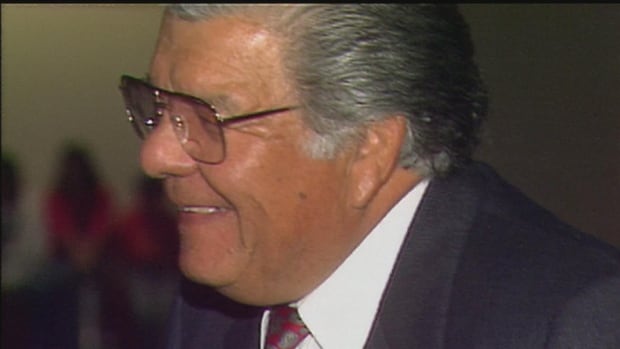 Elsipogtog First Nation is mourning the death of one of its most influential leaders.

Albert Levi, who was chief for 26 years, died in palliative care at the Stella-Maris-de-Kent Hospital in Sainte-Anne-de-Kent on Thursday.

In a statement to CBC News, his daughter Susan Levi-Peters, who is also a former chief, talked about her father’s full and interesting life.

“He was a professional wrestler, owned his own businesses and drove a bus before he became chief,” she said..

“He taught us so much and my community loved him. It is eight years since my mom passed and Nov. 9 will be their wedding anniversary. Now they will be together.”

Levi was first elected chief of Elsipogtog First Nation in 1967.

He was a member of the Order of Canada and received an honorary law degree from Mount Allison University.

Former lieutenant-governor Graydon Nicholas had known Levi since the 70s, when Nicholas was a lawyer and Levi was chief and the two were active with the Union of New of Brunswick Indians.

“His people had tremendous respect in him, and I think that’s why he was chief for a long period of time,” said Nicholas.

Nicholas said Levi’s service as chief came at a transformative time for both his community and for Indigenous people in general.

“The ’70s, I think people have to remember, was a great struggle for Indigenous rights, hunting, fishing, trapping, treaty rights and Aboriginal rights, land claims, and also to improve the services that our people receive from the federal government, like in housing, education, economic development and the list would go on and on,” he said.

“It was a very interesting and a very vibrant time for our people.”

Levi was forced to leave school after third grade because of his mother’s death, Nicholas said, and as chief he was a strong advocate of education and making sure schools were built in the community.

Nicholas said he will remember Levi for his strong sense of humour and his resolve.

“It didn’t really matter whether he was dealing with federal or provincial politicians, prime ministers, ministers or premiers, he strongly expressed his point of view”